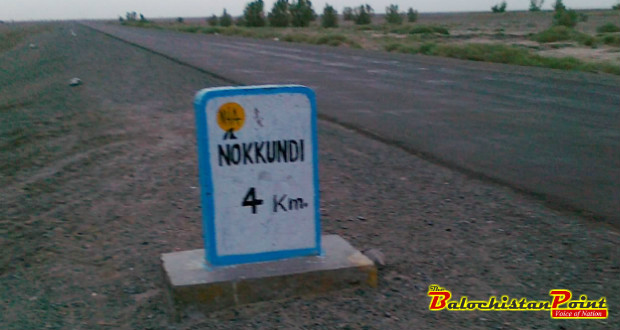 Nok Kundi: Schools at Nok Kundi are in a poor condition and the classrooms in some schools can collapse anytime. This was revealed by a group of journalists who visited three different schools in Nok Kundi on Monday.

Staff reporter of Balochistan Point was also a part of the delegation.

Balochistan is under an educational emergency since January 2014 and government has spent huge amount of resources on the promotion of the campaign.

High school of Nok Kundi, which was established 10 years ago, has vacancies of four general, one science and one computer teacher. It was also revealed that the classrooms of the school are in poor state and can collapse anytime.

Middle school of Nok Kundi has total strength of 270 and there are no sufficient classrooms for students.

“Our students have no choice but to study in open sky without any furniture,” said Mohi-ud-Din Notezai who is the headmaster of the school. He added that the formal notification of the school is still awaited.

Primary School of Killi Mengal Abad has strength of 105 and there is only one appointed teacher. The school premise doesn’t have any boundary wall and it’s a cause of inconvenience for students, journalist’s delegation learnt.

Residents of Nok Kundi, while talking to journalists, have urged Chief Secretary and Provincial Ombudsman to take steps to solve the problems of all three schools.

Published in The Balochistan Point on December 16, 2015