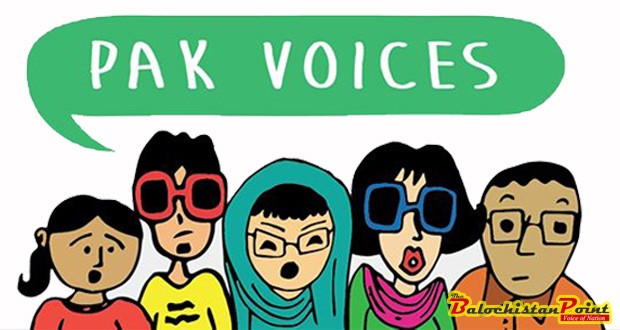 Pak Voices is a community-run news website that aims to bring greater transparency and accountability to governance in marginalized regions of Pakistan by highlighting the most pressing local issues which are ignored by mainstream Media. Pak Voices has started its operations from South Punjab and Makran belt of Balochistan. The Balochistan Point spoke with Mr. Osama Motiwala, Social Media Manager of Pak Voices, about the role of Pak Voices in Balochistan.

Adnan Aamir: What is the basic idea behind establishment of Pak Voices?

Osama Motiwala: Mainstream media neglects many areas of Pakistan. Pak Voices wants to build such an alternate media in such areas with the help of local citizens who can make their voice heard in the mainstream. The idea is to crowd-source news and content from local citizen journalists, publish them on a website and make that website a hit with the local audience. Ideally, the website will be handled by a local team, which is what we aim to do at the end of the project. 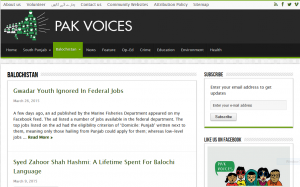 Tell us about the parent organization of Pak Voices, Bytes for All?

“Bytes for All” primarily works for digital rights, including; online privacy, campaigning against State and Corporate surveillance and censorship of all forms especially in the digital realm including mobile phones and internet. Bytes for All gives digital security training to human rights activists. The YouTube case against the government of Pakistan has been filed by Bytes for All.

For how long Bytes for all will financially support Pak Voices? Are there any plans to make it self-sustainable?

Bytes for All aims to support the project for the next four months. We want to make it sustainable during this tiny period which is an uphill task. The idea was to make it self-sustainable because we realize that most projects fail because first there is a lot of money involved and it stops when the funding stops. We want Pak Voices to be run by the community. We want our role to be as experimenters.

South Punjab and Makran Coastal belt, both are areas which are remote and not mainstream. Both have some basic infrastructure but face countless problems. We chose these districts based on availability of internet connectivity and areas with problems which are not highlighted.

Enlighten us about the training provided to the volunteers?

Nearly 20 volunteers each from both regions were provided training in social media tools, Urdu typing, using WordPress and news writing. The training was spread over three days where we conducted hands out exercises with volunteers and provided them with smart phones so they can report for us easily. It’s a volunteer based project, so that was the only incentive we could provide. Nearly all volunteers know the basics of reporting, and how to use WordPress to report in Urdu.

What has been the response so far from volunteers in Balochistan?

What is the outreach of Pak Voices websites? How many unique visitors you have on daily basis?

Our project is very young right now, and the statistics are not very good. I hope we can change this over the course of time. Our aim is to focus on quality rather than quantity of people visiting the website for now so that once we start rolling out good, local level content, people are going to visit the website automatically.

What is the level of success of Pak Voices, so far, in achieving its stated objectives?

Right now we have not achieved a lot because we have fewer volunteers in the area. The next level is letting the entire control of every local website in the hands of a local group of citizen journalists. But we want to do that after content starts flowing which means news updates on a regular basis and occasionally, feature stories. This also needs effective local marketing because the platform is meant to be, by the local audience and for the local audience. We have now utilized our remaining budget on paying volunteers for good feature stories. If someone wants to write a detailed feature story, we will be paying those 7000 for every feature story.

What are plans of expansion of Pak Voices in Balochistan?

This project can be sustainable only if local citizens take interest and think of it as their own project. If that happens, it would be easy to replicate the same kind of project in other parts of Balochistan. Pak Voices team has thoughts of replicating it elsewhere and to do that, we are fully focused on making it sustainable at this stage.

Lastly, what further support do you want from people of Balochistan for Pak Voices project?

The only support we need is participation. We need people of Gwadar, Pasni and Ormara to talk and write about the issues they face. We need local citizens to write about local culture, history, legends, poets and literature. Our aim is not to just promote news, but also those pieces which highlight the culture and the language of the area. We want to make Pak Voices an archive, so if anyone in the world wants to know about Gwadar, for example, information is available on the internet which is curated by the local community itself for transparency.

Published in The Balochistan Point on March 30, 2015

Disclaimer: Views expressed in this interview are those of interviewee and The Balochistan Point not necessarily agrees with them.