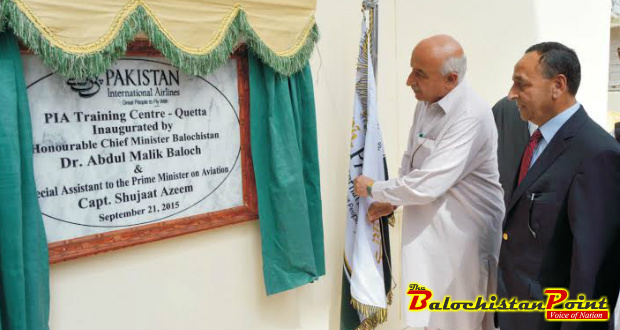 This new training center, established in Quetta, would be the 8th training center of the country and first ever in Balochistan from where annually 1,200 engineers would graduate in aviation sector.

Balochistan Point, in a news story in May this year, had raised the issue of lack of PIA training centers in Balochistan.

1,200 engineers would annually graduate in aviation sector from this training center.

Addressing the participants, Chief Minister thanked Prime Minister Mian Nawaz Sharif for establishing a training center in Balochistan and said this training centre would produce engineers that would ease the burden of unemployment in the province. “Our children are hardworking they should be given their due share in PIA and other federal services,” Mr. Baloch added.

Dr. Malik Baloch said that due to lack of flights, the government officials are compelled to stay for upto three days in Islamabad for a single day work that puts additional burden on the provincial exchequer. Contrary to this other provincial capitals had good number of flights and official visits Islamabad and get back the same day.

Chief Minister Balochistan said that previously our province was known for having a number of airports but nowadays most of airports were dysfunctional particularly airports of Sibi, Khuzdar, Jiwani and Panjgur that need re-carpeting. “If airports in remote areas are made functional then people would be benefited to some extent,” he added.

Government officials of Balochistan are compelled to stay for upto three days in Islamabad for a single day work due to lack of flights – Dr. Malik Baloch.

Chief Minister asked PIA to focus on Balochistan and ensure appointments of people hailing from Balochistan in jobs particularly at overseas.

Chief Minister announced that provincial government would provide land for establishment of another training center in Turbat city of Kech district.

Addressing on the occasion, Captain Shujahat Azeem, Special Assistant to Prime Minister on Aviation, said that it would be the 8th training centre across the country that would impart aviation training to the pupils of F.Sc pre-engineering who would become well trained engineers after completing four years course.

Another PIA training center would be established in Turbat – Shujahat Azeem.

He said that another training center would be established in Turbat that would benefit the students of Makran. “After getting training the students would get job opportunities not only in Pakistan but also abroad particularly in Middle Eastern countries,” he added.

Mr. Shujahat also briefed about the expansion and renovation of Quetta International Airport which would be started from September 28th and would be completed in 2016, and the project would cost Rs 1,876 million.

Published in The Balochistan Point on September 21, 2015