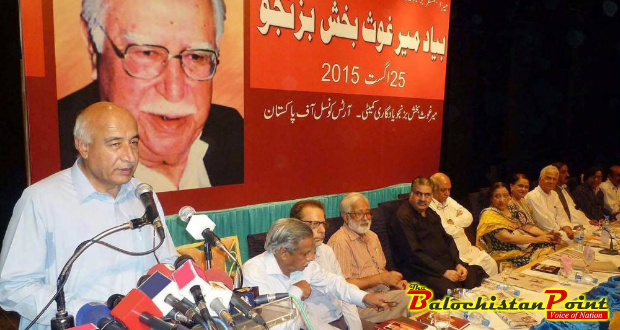 Karachi – A program was held in Arts Council Karachi to pay tribute to former governor of Balochistan and famous Baloch politician, Ghaus Baksh Bizenjo, on Tuesday.

Dr. Malik claimed that landmark 18th amendment was made possible due to political struggle of Ghaus Baksh Bizenjo and his fellows.

Event was presided over by Senator Hasil Bizenjo who is President of National Party and son of Ghaus Baksh Bizenjo.

Senator Hasil Bizenjo lamented that military operations are not the solution of Balochistan Problem.

“Balochistan has been pushed 100 years back in time due to the current so-called militant struggle,” said Nawab Sanaullah Zehri, Senior minister of Balochistan and President of PML-N Balochistan chapter.

“Establishment of Pakistan is alert after fall of Dhaka, Today, one can’t get independence by getting few AK-47s from Russia,” said Nawab Zehri.

He further revealed that 34 member delegation of Balochistan assembly went to USA on directives of CM Balochistan.

Published in The Balochistan Point on August 26, 2015

Balochistan 2015-08-26
Editor
Previous: Letter: Kech Medical College Should Be Made Functional
Next: Letter: Lack of Good Doctors in Makran