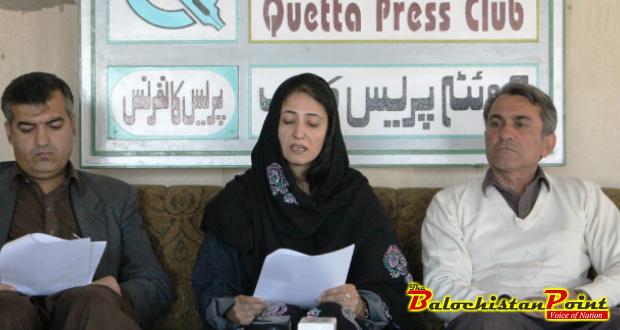 Civil Society Working Group (CSWG) Balochistan made this demand while addressing a press conference in Quetta Press Club, on Monday.

This workgroup represents civil society organizations of Balochistan and was established in aftermath of a round-table conference on “Civil Society’s Role in GSP+ Monitoring and Compliance” organized by Democracy Reporting International (DRI) in April 2015.

Main objective of the workgroup is to monitor the compliance on Pakistan’s international human rights commitments and engage with stakeholders, including the Government of Pakistan, on key reforms required to meet the GSP+ conditions.

Balochistan is far behind in establishing state bodies pertaining to human rights and child rights.

Speaking at the press conference civil society claimed that compliance to 27 international conventions, associated to GSP+ conditions, has a potential to transform entire lifecycle of citizens of Pakistan.

Working group extended its full cooperation to the government for human rights reforms, and other matters to maintain GSP+ status of Pakistan.

It was revealed that CSWG Balochistan has submitted its preliminary report to the EU highlighting key human rights issues generally prevalent in Pakistan and particularly in Balochistan. “The report has been well received and recognized by the EU Mission in Islamabad,” Sana Durrani said.

Sana Durrani said that there is a continued wave of multi-dimensional human rights violations in Balochistan, particularly the violations of civil and political rights, economic rights and civic entitlements associated to the right to life of citizens.

CSWG termed lack of implementation of existing labor laws as the reason for exploitation of the working class in Balochistan.

During the press conference Saalem Kakar also urged Federal Government of Pakistan to speed up the implementation of rights, through legislation, institution-building and democratic engagement.

Group members warned that non-compliance to the 27 UN Treaties, associated to the GSP+ may result in the weakening of trade ties with the EU which is one of the leading trade partners receiving 33% of Pakistan’s exports.

2016-01-26
Editor
Previous: Plight of Hindus in Balochistan
Next: Fragile Federation of Pakistan