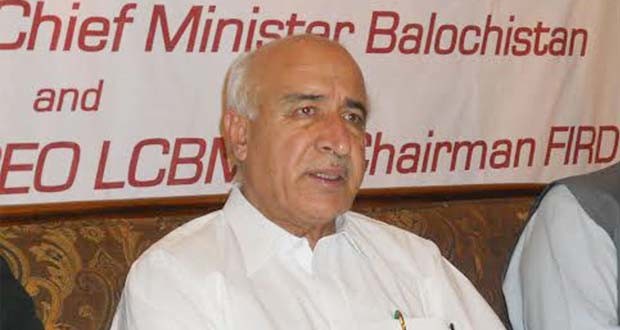 QUETTA: Chief Minister Balochistan Dr. Abdul Malik Baloch has said that government would take every possible step to protect the people and their property.

“Arrangements should be for early shifting of dead bodies of Shia pilgrims who were killed in Taftan tragedy and better treatment should be given to injured persons,” he issued these direction this while chairing a high-level meeting on law and order, here on Monday.

The authorities apprised Chief Minister Balochistan about the details of suicide attacks on Shia Pilgrim at Taftan that claimed about 23 lives and left several others with serious wounds.

The meeting also reviewed the reasons that why pilgrims were not traveling via airplanes despite government has arranged subsidized flights for pilgrims to Iran from Quetta and other cities of the country. “Immediate steps should be taken for the early arrest of elements involved behind heinous attacks on pilgrims,” Chief Minister directed and pledged that government would take every possible step to ensure security of masses and their property.

Meanwhile, Chief Minister Balochistan Dr Abdul Malik has directed for provision of security to private schools and educational centers in Panjgour district and categorically stated that no one would be allowed to play with the future of nation.

He expressed these views while talking to a delegation of principals of private schools of Panjgour who informed Chief Minister about the threats by a shadowy religious group to close down co-education in private schools and centers.

Chief Minister expressed his resentment and said that threatening private schools is tantamount to destroying our future. “Teachers and parents should not succumb to such threats and save the future of children sending their children to schools,” he said, adding that such elements want spoil education in the province.

Published in The Balochistan Point on June 10, 2014