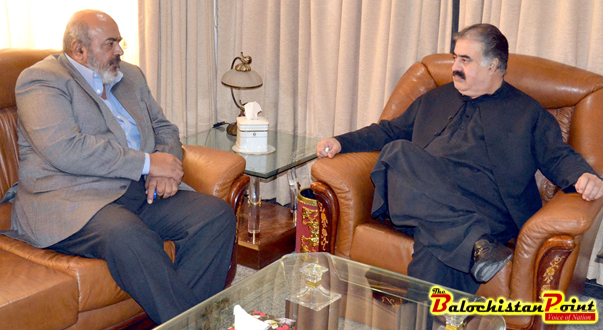 QUETTA: Chief Minister Balochistan, Nawab Sanaullah Khan Zehri while terming terrorism an international issue has said that political and military leaderships were taking concrete steps for elimination of terrorism. “Balochistan has immense opportunity of investment and government is ensuring peace to achieve development targets,” he added.

He was talking to Managing Director of Fouji Foundation Lieutenant General (r) Ahsan Mehboub who called on him here on Wednesday. MD Fouji Foundation informing Chief Minister about the Fouji Foundation said that it had great interest in establishing cement factory in the province while feasibility report of a factory having capacity of producing 4500 Metric Ton daily had been prepared. He said that Loralai, Bostan and Khuzdar areas were being considered for setting up of cement factory, adding that there was vast room of establishing factory in Balochistan which besides local market would also address the cement requirement of neighboring countries.

Expressing happiness over proposed establishment of cement factory, Chief Minister assured that provincial government would extend all possible cooperation in this regard. “Provincial government is taking tangible steps for promotion of investment and has established Board of Investment for the provision of facilities and incentives to investors and industrialists,” he said.

He said that provincial government was the main source offering employment to the masses, however, through booming of private sector the opportunities of employments would increase and people would less depend on government.

During the meeting they agreed upon that Balochistan is rich in mineral resources and is an important province while owing to China Pakistan Economic Corridor the importance of Balochistan has augmented.

Published in The Balochistan Point on August 16, 2017