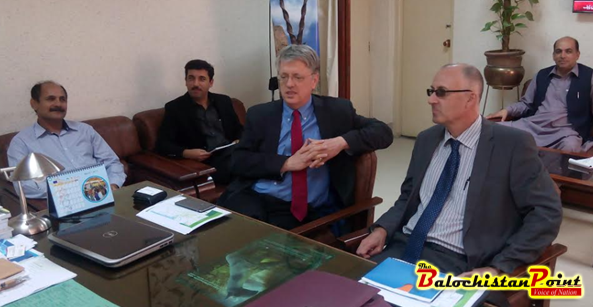 Project Director of BIWRMDP Mr. Abdul Hameed briefed about the details of the project and said, “The implementation phase of World Bank funded BIWRMD Project has recently been started to help the Province  better manage its scarce water resources for rural development and poverty alleviation  through: (a) restoring and increase water storage; (b) increasing water productivity through a combination of engineering, management and agricultural measures; and (c) building the local capacity in implementing similar interventions for sustainable water resources development and watershed management.”

In addition he said that in implementation of the Project would  be undertaken by Project Management Unit (PMU) established within the administrative control of the Secretary, Irrigation Department.

Prior to signing of the Legal Documents between the Government of Balochistan/ Pakistan and the World Bank, a set of documents comprising (i) Project’s Operational Manual; (ii) Financial Management Manual; and, (iii) Grievances Redress Mechanism was prepared to set out detailed policies, procedures and references to be used in the project’s operations.

Later on the team visited the established project management Unit Office where they appreciated the efforts of the team and endorsed their full cooperation and support in implementation.

The team met with Additional Secretary Agriculture Mr. Niaz Ahmed Nichari, the team also met with Secretary Forest and Wildlife Department Mr. Nasser Khan Kashani, on the eve secretary and the team suggested for proper logistic support, accommodation and any honorarium to the teams of the attached departments.

The team assured that they would look forward to solve all the issues but implementing the project would not  be compromised because it was directly associated with the general masses in the restive province. “As Water situation is  very dreadful and depletion rate is very fast, but also the efforts of Government of Balochistan are very impressive in this regard and hopes more pragmatic efforts will be carried on to solve the genuine problem of water shortage.” They added.