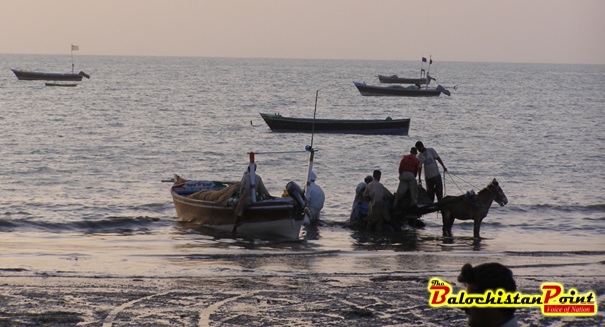 Gwadar: Lives and livelihood of local Fishermen in Jeopardy

Fishermen sat on strike in front of the Municipal Committee Office Jivani, district Gwadar while their families waited for the day’s meal.

In Gwadar, for more than 70% local residents fishery is the basic source of income. “You catch fish on daily basis and then sell them in the local market. Most fish is sold to dealers who further send them to industries in Karachi,” said Asif Ali, one of the local fishermen on strike, describing the fish business and its importance for people. “We don’t have anyone to address our issues and sitting on strike has now become a routine for us but what else can we do,” he explained.

For fishermen’s families accessing basic necessities has become an everyday challenge now and women and children often have to wait for days to see some good food in their homes. This also shows just how unprepared Gwadar is to benefit from the upcoming development of one of the world’s deepest sea-port, when most of its population struggles for survival and can hardly send their children to schools.

The ongoing sit-in of the fishermen is a series of protest they had been carrying out from last 15 years. “The trawler mafias previously were only a threat to our livelihood but now they are a threat to our lives,” Asif told. “They are like pirates, patrolling in our sea, who have been looting our fish even destroying marine life and then torturing us (fishermen) above all.”

Also known as draggers, trawlers are large commercial fish vessels that drag or pull trawls through the water. According to International Marine Conservative Institute, trawling is severely damaging to seafloors ecosystems. The trawler nets indiscriminately catch every object it encounters. Hence, many creatures end up mistakenly caught and then thrown over boat dead, including endangered fish, green turtles, extremely valuable deep-sea corals.

This collateral damage can amount up to 90% of the trawl’s total catch. This also includes large seafloor habitat that gives marine species shelter and food. Such destructive fishing can leave Makran Coast’s marine ecosystem permanently damaged.

Hence the fishermen of Gwadar district have been protesting against such destructive techniques of fishing by the trawler mafias of Sindh. According to the local fishermen, they tear apart and take away local fishermen’s fishing nets, overfish and drag across the seafloor of Makran, scooping up everything in their path from the targeted fish to the centuries-old corals, leading to the collapse of local fishermen’s economy.

Balochistan’s 770 kilometers of the coastal belt with almost no pollutants produces 147,000 tons of fish and Sindh’s 350 kilometers produce up to 346,000 tons annually, even in the presence of oil and other harmful pollutants.

Major reason for the higher fish production in Sindh is a large number of their trawlers sail all the way to Balochistan coast, snatching the local fishermen’s only source of income.

“There is no one to take action against the trawler mafias and we only end up losing work days. But even if we go fishing, we end up with nothing as compared to the past. They have finished all the fish in their sea and have left nothing for us in our coast either.”

He continued, “Now as we see them (trawler mafias) looting our sea, we protest and ask them to leave but being in huge trawlers, they in return throw hot water on us and start firing sometimes too.” Asif’s concern of the current reality in Makran Coast may seem dire. Yet, it is based on the premise that if the trawlers continue to operate, not only will the marine life in Makran Coast be totally destroyed but fishermen will also suffer from hunger after losing their only source of income.

“A few weeks ago, some of the local fishermen in Jivani were caught by the trawler mafias. They were kept inside their trawlers and tortured. A similar case appeared in Pasni last month too,” Irfan said, a local fisherman from Pishkan, a village near Gwadar. Although these fishermen were released later but this episode made one thing clear: lives and livelihoods of Baloch fishermen are at the risk of being eliminated

These threats were the major reasons behind the strikes by the local fishermen outside the Municipal committee Jivini. “News of the CPEC and the Port has reached the world, but threats to our (local fishermen’s) livelihood and lives are still unheard,” protesters complained.

Local officials of Gwadar district and Fisheries Department assured to solve the issue soon pacifying protesting fishermen.. Despite the commitment of local authorities, there has been no action against the trawler mafia “No practical step has been taken yet.” Irfan pointed out

On the other hand, sufferings stemming from trawler mafia’s regular violence have concerned the authorities according to the assistant director fisheries department. “We have patrolling teams along the Makran Coast at about 12 nautical miles now. Our team has recently caught three trawlers. The crew members are in legal custody. Now to ensure trawlers’ limited access to our coast, we have put forward the policy to have the patrolling teams as far as 20 nautical miles.”

The policy is yet to be approved and implemented. “Even if the policy is implemented or the crew members of a few trawlers are in legal custody, it does not ensure if the trawlers will stop coming to our coast,” says Barkatullah Baloch, a local social activist. He went on to add, “There is no hope for this issue to be solved because of lack of political will. Almost all political parties have shown sympathy with Baloch fishermen but in actual they did nothing to solve the issue. There is need for effective legislation. And until fishery department is not given authority, this issue will never be solved.” (Courtesy: Pak Voices)

Mariyam Suleman  is  a freelance journalist and assistant editor of The Balochistan Point. Follow her on Twitter @MariyamSuleman

Published in The Balochistan Point on January 17, 2017