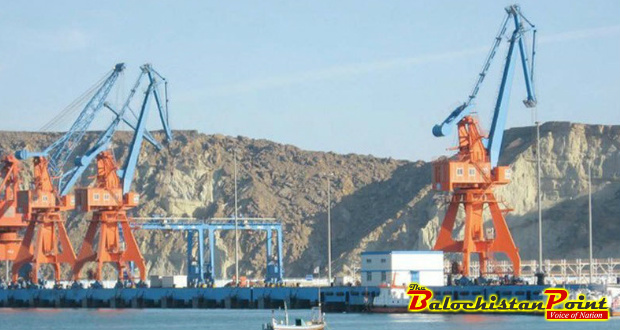 This is Part-3 of three articles series on this topic.

India also observes Gwadar port from military and realistic perspective, and is apprehensive about Chinese arrival in close proximity to its naval bases thus challenging its naval hedge in the India Ocean regions. Kaplan argues that, “Additional important element of this economic and energy competition is that China’s establishment of noticeable military presence in Gwadar, called by the name of the “string of pearls” strategy, immediately challenges India’s place and situation in the region where India does not let any nation to challenge its authority”.

Both China and India import large amount of their energy resources, such as oil and gas, through the Strait of Hormuz that is very close to Gwadar port, less than 250 miles. Gwadar port will provide an extra edge to China by having its large military and naval presence at Gwadar. It will also give a significant and valuable quality for protecting Chinese shipments which is an extreme threat to Indian conditions. It has, therefore, forced India to finance and provide engineers, technicians and experts for the development and up-gradation of Chabahar deep-sea-port to swiftly counter and contain Chinese presence in the Indian Ocean.

Presence in Gwadar is a part of China’s string of pearls strategy.

While Iran is inclined to capitalize on Chahabar port by providing with port access to Afghanistan, Central Asia, and India and in return acquire billion dollars in revenue. The port will also help Iran access the word quite easily for exports and imports. Here comes Gwadar port as a formidable stumbling block to the very regional interests of so-called Indo-Iran alliance. Resultantly, both these countries have been immersed in clandestinely fuelling low-level insurgency and bubbling ethnic militancy in the restive province. Arguably, the rising Indo-Iran bloc is likely to ramp up such insidious, obstructive and covert shenanigans in mineral rich Balochistan intended to make Gwadar port useless for China for their regional interests.

Since the commencement of Gwadar port project, US has been concerned about Chinese engagement with the port. It fears that the world’s second largest economy, China, would use the port to carve up ‘spheres of influence’ in the Middle East and Africa while threatening American regional interests. Furthermore, the US perceives the arrival of Chinese Navy in the warm waters of the Arabian Sea as a challenge to its long lasting hegemony in the Gulf and in the Indian Ocean. It, too, is striving to inhibit China from becoming more powerful economically by banking on resources of Balochistan, Africa and oil and gas of the Middle East via Gwadar Port and the China-Pakistan Economic Corridor (CPEC). As a result, US has been and will stoke the simmering insurgency and Shia-Sunni schism in Balochistan. Possibly, it will assist both Iran and India in terms of supporting and stirring up insurgency.

Europe is faced with some kinds of energy shortages due to Russian stoppage of oil and gas to the continent recently on the issue of Crimea and subsequent economic sanctions on Russia. Interestingly, Russian companies purchase the Central Asian energy resources and sell them to the European nations on profit. These practices created strong encouragements for European nations to build pipelines from Central Asia to Gwadar because these pipelines would greatly benefit those countries by excluding Russian tentacles and obstructive role.

From the above discussion it is crystal clear that Gwadar port endows Pakistan with both strategic opportunities and challenges. After all, the ball is still rolling in Pakistan’s court that how effectively it will employ its legislative, executive, judicial organs, bureaucracy, military and diplomacy to maximize the deep sea port. If Pakistan succeeds tremendously in this regional game, Gwadar port will ensure Pakistan’s high quality all weather connectivity to Afghanistan, Iran, Turkey and Central Asia, ensuring speedy movement of personnel, goods and services between these countries and China-Pakistan Economic Corridor (CPEC) would result in qualitative up-gradation of Pakistan’s land connectivity related infrastructure. If not, India and Iran will reap the benefits thus undermining Pakistan’s core national interest.

Published in The Balochistan Point on September 24, 2015