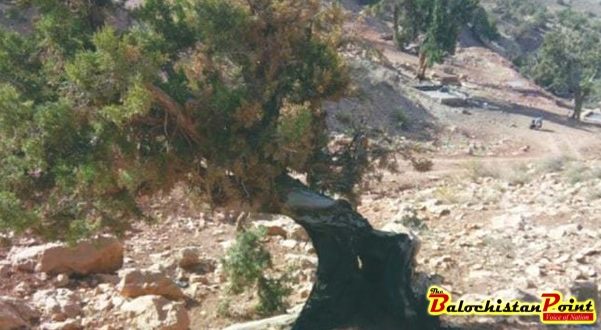 KALAT: A thin spire of smoke curls from the forest floor where four boys are bent over a pot at the foot of an old juniper tree near a stream of water. Motorcycles parked to a side and loud music blaring from speakers, they are here for a picnic. The broken bran­ches of the stately tree suggests that is where they obtai­ned the wood to get the fire going and I ask if they realise that the entire tree might catch fire. A young boy dressed in traditional Balo­chi shalwar-kameez replies sharply: “It’s none of your business.”

Too many junipers in the fabled forest of Harboi have roots ringed with black soot — remnants of many happy picnics but symbolic of the stinging apathy of locals and a state that doesn’t place preservation high on its list of priorities.

I got the opportunity to visit Balochistan’s historic Kalat district towards the end of August. The two-hour ride from Quetta to Kalat city is pleasant enough and the weather glorious. I left for Harboi in a red pick-up after a small rendezvous in the city and the driver, Murtaza Baloch, a garrulous young man, explains that the forest was a popular picnic spot for locals.

“The people from Kalat city, Khuzdar, Quetta, and even Karachi come to Harboi for picnics,” Murtaza says, nodding, “Yes. It is mostly the locals of Kalat district, particularly youngsters, who come here for picnics.”

After covering close to 50 kilometres, mostly via kutcha roads cut into mountains, towards the south-eastern side of Kalat in an hour, we were greeted by the heartbreaking sight of Harboi’s dwindling trees.

The vehicle came to a halt at the summit of the tallest of Harboi’s mountains. Two weather-beaten buildings stand here — an old mosque and a dilapidated rest house owned by the Khan of Kalat. An eerie silence pervades the thicket.

“As I said earlier, it is only used as a picnic spot these days,” Murtaza breaks the silence. “I bring people and families from Kalat city to Harboi for Rs2,500.”

The forest’s endless rows of juniper trees of various shapes and sizes are interspersed with spreading shrubs. Too many of them, however, bear the scars of having been used as firewood and fireplace. Some of the trees have large blackened hollows burnt into them by the flames.

“There is no one to reprimand those responsible for their inhumane attitude,” says Javed Iqbal, a social activist based in Kalat city. “When boys [from our city] go for picnics to Harboi, they do not buy firewood in the city … they say that an entire forest of juniper stands at the picnic spot of Harboi [for them to use as firewood].”

Sharing information about the forest, an official at Kalat’s Forest Department says Harboi’s juniper forest stands at 9,000 feet above sea level, covering around 55,230 acres. The mountain range of Harboi begins from the Deghari area of Dasht to the Zehri area in Khuzdar district.

According to him, there are trees other than junipers that are native to Harboi. “There are around five natural streams which flow all year round,” the official says, “There are also wild animals here who people mercilessly hunt down.”

It is clear that Harboi is a national asset. But it has been abandoned. None of the neighbouring towns and cities, including Kalat city, has access to natural gas notwithstanding the fact that Sui-gas was discovered in Dera Bugti as early as 1952. The residents of these towns and cities turn to the trees of Harboi for fuel.

Iskalkoo, a town neighbouring Harboi, is a lush green beautiful place. The population of this town, according to residents, runs into thousands. Ashraf, a resident of Iskalkoo, says, “I chop down the trees for domestic use, because there is no alternative. We could either die from hunger or chop trees from the juniper forest of Harboi to get fuel for our stoves. Had we been provided gas, I swear I would not be chopping down trees.”

He goes on to add: “Everyone does that and it is not a secret. The wood from the forest is even supplied to Kalat and other towns across Balochistan.”

Javed Iqbal, a resident of Kalat, explains, “Previously, truckloads of juniper trees would be supplied out of Harboi. That has stopped now and instead of trucks, the trees are transported on pick-up vehicles. A pick-up’s load is sold for Rs10,000.”

The fields of forlorn tree stumps in Harboi are testament to this. “The juniper forest of Harboi is disowned, ignored, and forgotten by officials. The local administration accords it no priority even though we have four senators, an MNA and two ministers of the Provincial Assembly,” laments Iqbal.

Kalat-based journalist Yousaf Ajab Baloch echoes Iqbal’s claims: “It is true that the juniper forest of Harboi has been neglected by authorities…but we don’t know why. This unique forest is being chopped down persistently. At the provincial level, there is imbalance on the part of authorities regarding the juniper forests in Ziarat and Harboi. For instance, there are 400 guards stationed in Ziarat, and only five guards for Harboi forest.” Courtesy : Dawn

Published in The Balochistan Point on September 9, 2017