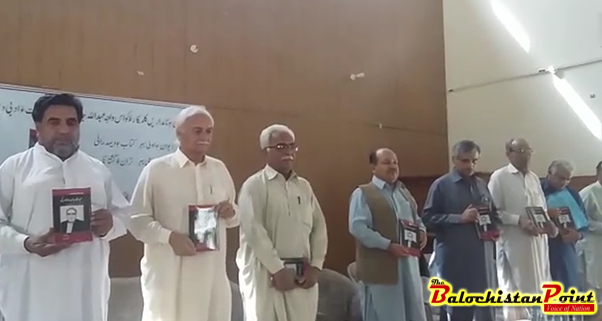 QUETTA: Renowned thinker, researcher and literary figure of Balochistan, Professor Abdul Jan Jamaldini was a symbol of peace and struggle if we follow his footsteps we can form an educated and prosperous society.

Speakers expressed these views in a seminar organized by Zind Academy in Nushki the other day to pay homage to Professor Abdullah Jan Jamaldini for his great services on his first death anniversary.

Dr. Shah Muhammad Marri, a research who was also presiding over the event said: “it is not easy to fill the gap of such a huge literary figure because it is a huge gap, the big loss after sad demise of Abdullah Jamaldini is that he was the last representative of this leading generation.”

“Now we have to find ways ourselves, we have to recognize each other and come up with qualitative and standard services in all fields,” he added.

Mr. Marri said that Nushki had produced a number of personalities who contributed a lot in literature and politics. “I would say Nushki is the Vatican City of Balochistan,” he said.

Sarwar Agha, who was the chief guest, said Abdullah Jan was a ray of hope and was a start in deep black night that show the right path to commuter.

Waheed Zaheer, a writer and poet said that Abdullah Jan was an institution and owing to his efforts and contributions departments of Balochi, Biravi and Pashto languages had been started in Balochistan University. “He also promoted and encouraged women education that yielded fruitful results that now could be seen in all spheres,” he added.

Mubarak Ali, a political activist and short story writer said that personalities like Abdullah Jan Jamaldini take birth in centuries. “He was also our political teacher, all political workers should follow his teachings,” he said, adding that Abdullah Jan struggled for the improvement of society and laid the foundation of progressive politics. Abdullah was a light for backward and dark Balochistan, he added.

Professor Javed Akthar said that Abdullah Jan served humanity without prejudice and his message would be completed when we succeed to establish non- class society.

Dr Attaullah Bezinjo said that his services for the promotion of education in Balochistan had been matchless, adding though he is not physically among us but his thoughts and works are always alive.

Munir Essa said that though he spent little time with Abdullah Jan Jamaldini but he could never forget those great moments and love Abdullah Jan extended towards him and other people.

He said Dr Shah Muhammad Marri had termed Nushki the “Vatican City” of Balochistan now a huge responsibility had come on shoulders of Nushkities to uphold this honor by expediting their efforts in promoting education and making Nushki a hub of literature.

Published in The Balochistan Point on October 2, 2017