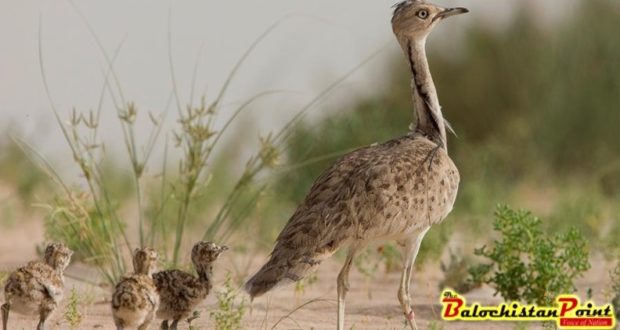 As the Houbara Bustards have started to migrate from the central Asian Countries in the chilled winter season to the deserts of Balochistan, Sindh, KPk and Punjab, the Arab shiekhs with their entourage have too started arriving in different areas of Pakistan to hunt the endangered bird.

Indubitably, these Arabs arrived here in the early 1970s who included Sheikh Zayed bin Sultan Al Nahyan, at the time when he ruled the UAE which included federations and sheikdoms of Ajman,Fujairah ,Ras al-Khaimah, Abu Dubai and Umm al-Quwain.

Having been hunting for a long time in the winter season in different areas and regions of Balochistan, these Arabs were once again permitted to hunt the internationally threatened bird in various areas of the country. They hunt here during the winter season from the November 1st to January 31st. Per contra, the federal government annually issues 25 to 35 permits to the Arabs.

Pakistanis are prohibited to hunt the bird because of some wildlife protection laws and under other international agreements.

In the provinces like Punjab, this trend of hunting the protective bird is highly appreciated.
When the sheikhs are about to arrive in the country, then officials from the wildlife departments ask the native villagers to prepare for the royal dignataries’ arrival. On account of preparing for them, they are paid thousands of money to guard the fields where houbara bustards are seen.

This pinpoints that the bird has been a diplomatic bird, for it is used to have close proximity with the Arabs.It isn’t the first time that these royal dignitaries have been let hunt in the country, it started long ago when these royal families were issued special permits to hunt the bird in the districts of Balochistan and Punjab, especially in the districts of Washuk and Chagai.

They hunt the birds via using birds like the falcons etc which still remains a practice in the Arab communities.These royal dignitaries have also built airports for their special airtrips.
Build in various areas of the country, these sui generis airports are only for the Arab royals and shiekhs.

Though, these royal shiekhs hunt a massive number of rare birds and animals but they pay for these special permits and had spent millions of money to initiate development works, i.e building schools,mosques, roads and donate funds for the wildlife conservation-based organizations in different regions of Punjab,Sindh and KPK. The natives residing in the villages of these provinces are often rewarded with new schools, health centers but the locals in Balochistan suffer more losses than rewards.

The police and guides guarding the fields stop the local field owners from visiting their fields until the Houbara bustards are hunted.This can take days and days and antagonizes the local farmers whose living relies on producing crops_ depending on karez and rain.

As a result, this has been causing havoc to the farmers of Balochistan not only because their crops are usually trodden out by them but they have never carried out development and infrastructural works in the region and they confronted attacks too by the villagers in Balochistan.

Once, a group of armed villagers assaulted on a royal family member,  when they were on an expedition to hunt the endangered bird in the district of Musakhel. The royal convoy was saved though, but it left three guards wounded.
According to officials, the villagers went enraged and violent when they weren’t permitted to meet the royal group to ask for donations for building a mosque. In the same year, another royal convoy was attacked by a mob in Panjgur when they were hunting the houbara bustard. Morosely, this rare bird has been listed in the red list of the International Union for Conservation of Nature owing to being vulnerable. Experts are of the view that Its current population ranges from 50,000 to 100,000 in Balochistan.

Astonishingly, these shiekhs hunt thousands of birds in one single trip in the province.Their hunted birds ranges from 2,000 to 3,000.This can be understood when the Prince Fahad Bin Sultan who is the member of the house of Saud and the governor of Tabuk province hunted almost, 2,100 houbara bustards between 2014 to 2015 in the district of Chagai.

Surprisingly, the bird was hunted near to extinction in the Arabian Peninsula whose meat has been prized by the Arabs.But, in the Al-Sayd Reserve of Saudi Arabi, there are spontanous initiatives taken forth to preserve endangered animals and birds like houbara Bustard ,oryx, and sand gazelles. Covering an area of some 2,200 sq/m , it makes it the second largest natural reserve in the world.But banning the merciless slaughtering of the endangered houbara bustard in Pakistan is said to disturb the foreign policies and diplomacy of the country.

To arrest the decline, In 2014, the BHC (Balochistan High court) put a ban on hunting the endangered bird after the ex-speaker Muhammad Aslam Bothani petitioned. On the contrary, in the years following the petition, the ban was lifted when the members of the existing government argued that it could disturb the outgoing ties with the gulf countries.They argued although, they hunt a whopping sum of the birds, but they too bring home funds which could benefit the country’s economy.

Conclusively, owing to the dwindling population of the bird many international organisations based on the conservation of wildlife have banned the hunting of the houbara bustards but the situations stand reversed in Pakistan where annually a whopping number of permits are issued to the ruling elites of the gulf countries.

Broadly, infrastructural works should also be conducted in the areas of Balochistan using these funds and the locals ,from whose fields the birds are hunted should be ensured money in advance so that the losses are recovered.

The bird needs to be preserved and protected in Pakistan , if not , then we won’t be able to look at the houbara bustards in real life but in photos only in the mountains and deserts of the country.

The writer is a regular contributor to Balochistan Point.

Published in The Balochistan Point on December 15, 2018