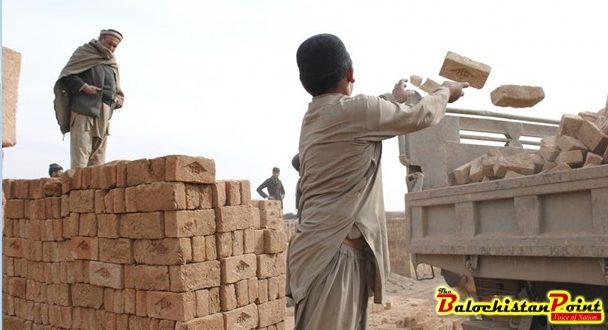 Hazrat Hussain, 10, loads bricks onto a truck. Hazrat doesn’t go to school and works alongside his two teenage brothers at a brick kiln outside Kabul.

Rahimullah, a 15-year-old Afghan boy, told Human Rights Watch last year that he has worked as a brick maker for five years, working from 4:00 a.m. until nightfall.

“My smaller siblings also work,” he said. “When they turn five, they start working… It’s not just one thing we do; there are a lot of things to do in the brick business – go clear the ground, take the shovel, bring the pickaxe, do this thing, bring me the bucket… the point is, everyone works.”

In Afghanistan, years of armed conflict have fueled poverty, and by extension, child labor. At least a quarter of Afghan children aged five to 14 work to support their families – often for long hours and with little or no pay.

In conflicts and disasters, parents may lose their jobs, and schools may be destroyed. With few other options, children often begin working. Migrant and refugee children are especially vulnerable to child labor. Children can end up separated from their parents, and need to support themselves, or may feel pressure to help support their families. For example, around 60 percent of Syrian refugee families in Jordan rely on money earned by children, due to inadequate aid and dwindling family funds.

Desperate economic circumstances often lead to child labor, but putting kids to work is no solution to extreme poverty. In fact, research shows that child labor perpetuates poverty. Many children who work miss out on an education, and become less likely to find well-paying jobs as adults.

Kids shouldn’t have to sacrifice their health, safety, and education to help their families make ends meet. Governments should make providing an education for children affected by war and disasters a top priority, and help their parents access decent work too. Urgent action is needed, so that children like Rahimullah can have the chance to just be a kid. Courtesy: www.hrw.org

Published in The Balochistan Point on June 15, 2017