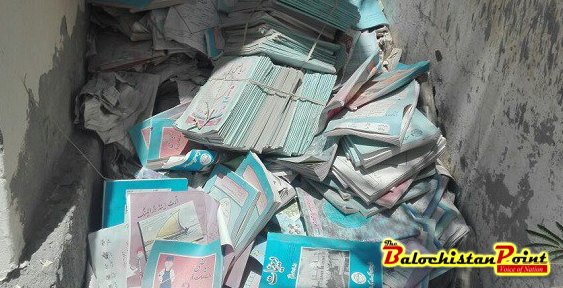 Turbat: Hundreds of books of Balochistan Text Book Board have been dumped in garbage at District Education Office Kech. It should be noted that these books  were being terminate-ridden that is why they threw the in garbage.

These books had been sent by Balochistan Text Book Board for free distribution in the government schools but the distribution never took place and books trashed.

According to the Education officer Imdad Malik these books were not for students but just guidelines for teachers as well as they are four years old when I was not office holder.

Director Bureau of Curriculum was about to conduct a program for the training for government teachers. Due to some unfavorable situations the program could not be conducted so that is why the books remained in the office for last four years.

Deputy Education Officer Muhammad Naeem said “Annually we order around 85 thousands of books which are more than the enrolled students’ strength. These books which have been found on the garbage dump those are remaining books.”

“The enrollment of students in school is 11435 in present year; however in 2015 it was 16837. At the present time the strength of schools in district Kech is 664 and 74763 students are enrolled who are pursuing their education.” Muhammad Naeem added.

2016-08-27
admin
Previous: Letter: Drug dealing and the role of government in Quetta
Next: CM Balochistan says, the future of Pakistan and Balochistan is linked with CPEC