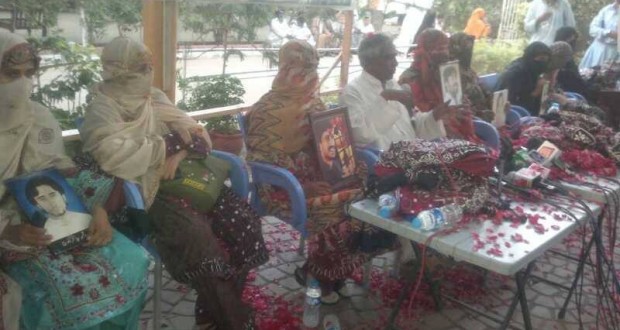 I was pressurized by government and state agencies for not launching long march: Qadeer Baloch

Karachi: I was pressurized by government and state agencies for not launching long march, alleged Qadeer Baloch, vice chairman of Voice for Baloch Missing Persons (VBMP) in his press conference at Karachi press club on Friday.

The Voice for Baloch Missing Persons (VBMP) led by Qadeer Baloch launched a long march from Quetta to Karachi on 27 October to press the authorities  for recovery of missing Baloch political workers.

After 750 kilometers of walking, the participants ended their long march at Karachi press club on November 22, 2013 and held a press conference.

The leader of long march alleged that while marching towards their destination they confronted   a number of difficulties, and received death threats on phone calls to stop long march.

“Our travel was long and full of hardships but we had strong will, therefore we marched with passion and commitment.  Peoples’ response in different cities including Sardar Akhtar Megal’s remained very positive and supportive.” Appreciated Baloch

Qadeer Baloch differed with the statement of National Party leader senator Hasil Khan Bezinjo that abduction and Kill and dump of Baloch had been stopped. He said that “Abduct kill and dump” policy is still continued in Balochistan, even in the home town of Hasil Beznjo.

“Currently 18000 people are missing and we have provided the list of these missing persons to UNO, and 1500 missing persons’  dead bodies have been dumped. More than   600 Balochs have been target killed   which include intellectuals, doctors and professors.” Said VBMP vice chairman

Qadeer Baloch said “The Chief Justice   of Supreme Court himself   admitted involvement of state agencies in abductions with evidences   but his decisions were not put into practice and till today the violation of human rights in Balochistan is continued.”

Qadeer  Baloch termed Dr Malik’s government worse than the previous ones. He said that Dr Malik  had said that if he failed in recovery of Baloch missing persons  then he would resign from his position and recently he admitted his failure.

Baloch thanked BBC and Vash news for covering their long march; however, he blamed the mainstream media in Pakistan for ignoring their march.

“We will soon hold a seminar and announce our plan for further struggle. It would not end here. We will either approach United Nations, or find some other ways to continue our struggle against oppression,” said Qadeer Baloch

Published in The Balochistan Point on November 22, 2013

2013-11-22
admin
Previous: PAKISTAN: The Long Marchers have completed 700 km and entered Karachi after travelling 27 days on foot
Next: Marches to Justice‏