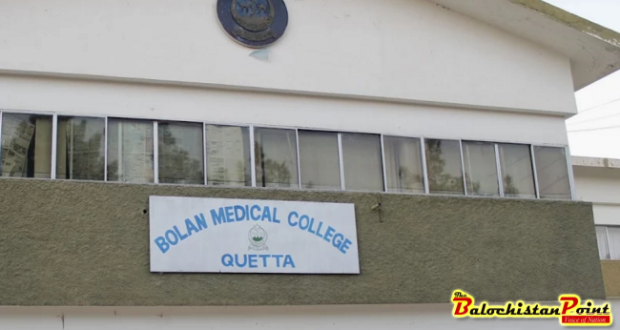 Bolan Medical College has always been counted among the colleges which only select the students on merit basis. It is the only medical college in Balochistan which provides education of medical sciences; however, recent news has marred its image desperately, as four illegal seats have been given to the sons and daughters of clerk’s working class and a Professor’s son as well through improper channels.

Latest prove of this menace act shows that even a gardener  of the college and  four other have  been given admission before their F.Sc result declaration. This very low defrayable move shows the strong hold of clerk mafia in Bolan Medical College.

Such activities in a professional college like Bolan Medical College presents how the tall claims of restoring the merit is taking place  Inappropriately. By doing such illegal allocations it nudges to mitigate that how come a student prior to F.Sc can get admission in Medical Colleges.

Discussing on this issue while talking to the representative of Baloch Students Action Committee (BSAC), a leading student’s organization in Balochistan  revealed,   “The clerk mafia and one of administrated officers have been long doing such condemn-able activities and BSAC from the beginning has been raising voices against such actions of the concerned authorities and members.”

The representative further said that once the court was miss guided by the administrated officer who appeared before the court on behalf of College and gave wrong information and justification.

Students of concerned committee raised apprehensions over the role of these clerks in College and suspected them for the deteriorating condition of College, they also pointed out the other issues of Colleges.

Students’ concerns and recent issue of illegal seats reveals the said clerk’s mafia has long been involved in such activities.

Another student from Bolan Medical College exclaimed,” Deserving aspirants from far-flanged areas of Balochistan are being severely deprived and this is a big deception to them which is perhaps being practiced each year.”

Some other authentic sources also disclose that few children of said clerks are enrolled in other colleges which were granted admissions through sort of improper channels as well.

For the sake of admission in Bolan medical College, students throughout the Balochistan burn their midnight oil and after going through NTS test, they are granted admission. Even some students get admission after 3 to 4 attempts. Such acts probably will discourage the students who have been left behind and those preparing for forthcoming test.

Government and concerned authorities should take actions against Illegal seats allocation in Bolan Medical College; because it will raise a glimmer of hope among the students as well as lessen the chance of such acts in future.

Published in The Balochistan Point on February 27, 2016