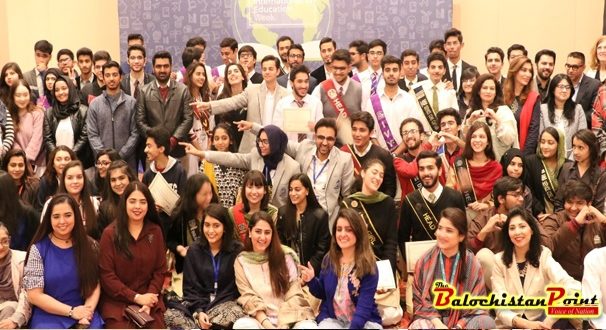 Islamabad: EducationUSA at the United States Educational Foundation in Pakistan (USEFP) celebrated International Education Week (IEW) November 12-16 in Islamabad, Lahore, and Karachi as part of ongoing efforts to foster cultural and educational exchange.  IEW is a joint initiative of the U.S. Department of State and the U.S. Department of Education to promote international education worldwide and to inculcate a global sense among future young leaders.

“An international education prepares young people for a more globalized world, regardless of someone’s field of study,” noted Christopher Fitzgerald, Minister-Counselor for Public Affairs at the U.S. Mission to Pakistan.  “Exchanges bring people together and promote mutual understanding.  The United States remains committed to these exchanges, and we are pleased that so many Pakistanis decide to study in the United States every year.”

The number of Pakistani students in the United States increased for the sixth consecutive year, going up by 7.4 percent to reach a new high of 7,537, according to the 2018 Open Doors Report on International Educational Exchange, which was released earlier this week.

To celebrate creativity and diversity during IEW, USEFP organized events throughout the country.  In Islamabad, USEFP hosted it’s first-ever Science Fair.  EdUSA Talks in Lahore was based on the popular format of “TED Talks where U.S. graduates speak about their life experiences and achievements under the themes of “Women in STEM,” “Breaking the Barriers,” and “Finding Your Spark.” A networking event hosted at the Consul General’s House in Karachi brought together notable Vice Chancellors and U.S. Alumni in Karachi for a meet and greet session.

For IEW 2018, USEFP also focused on education through sport. The Annual USEFP Cricket Tournament was organized in Karachi and encouraged both men and women to engage in Pakistan’s most popular sport.  USEFP Islamabad, in collaboration with Islamabad College of Arts and Sciences (ICAS), sponsored a weeklong sports championship.  Additionally, USEFP Lahore organized its first ever Girls’ Football Tournament, empowering girls to break stereotypes.

Other features of the IEW included: the High Achievers’ and Counselors’ Recognition Ceremony, community service days in underprivileged communities, a Dramatic Reading Contest in Islamabad, as well as webinars and virtual advising sessions with various university representatives in the United States.

EducationUSA at USEFP offers free advice and assistance to students interested in applying to or learning about U.S. colleges and universities. USEFP is a bi-national commission established in 1950 by the governments of Pakistan and the United States. It is one of 49 Fulbright Commissions located throughout the world.

Published in The Balochistan Point on November 20, 2018