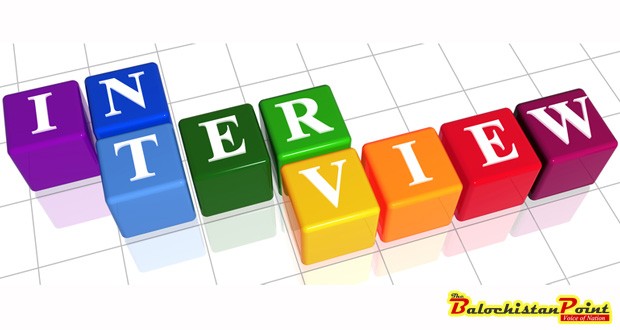 A candidate narrates how he was deprived of his right in job selection in Jaffarabad district of Balochistan.

Government of Balochistan had announced earlier that recruitments of Secondary Education will be held by under the supervision Deputy Commissioner (DC) of concerned district so that transparency can be ensured.

Written exams for Junior Clerks (BPS-7) for education department in Jaffarabad were held on 21st March 2015. More then 500 candidates appeared in the exam and 106 passed it.

After few days, passed candidates were called for interview at DC office Jaffarabad. I was asked to sign the attendance sheet before I went in the interview room.

Following is transcript of the conversation that took place during the interview:

Additional Deputy Commissioner (ADC): Please tell us your name, your father name and where you live? (Asked In Urdu)

Me: I introduced myself completely in English

ADC: Ok, What is romanticism?

Me: Sir, It a movement of art and literature which originated in late 18th century

Me: Ma’am Criticism may examine a particular literary work, or may look at an author’s writings as whole.

Interviewers then started a long series of questions relating to literature.

ADC: What is Difference between Game and Gamer?

EDO female: What is drama?

EDO Male: What is Ghazal?

EDO Male:  Tell us one verse of Mirza Galib’s poetry?

DDO Male: Who was Shakespeare?

ADC: Tell us one quotation of Shakespeare.

EDO female: Who was Hamlet?

I answered all the questions correctly and in a frank manner. During my interview ADC said, you’re giving us tough time.

ADC: OK you have applied for the post of Junior Clerk, so let’s come to the business.

ADC: In front of you, MS word is open on a laptop. You have 1 minute, select a passage from this book and start.

I started typing and in a minute I typed 38 words with just 1 spelling mistake.

On 14th April, list of qualified candidates was announced and surprisingly I was not selected. I know very well all the selected candidates and I know that they don’t know anything. It’s an open challenge for selected candidates to compete with me in any test or interview. I don’t have words to describe my feeling of disappointment. I gave an excellent test and interview and incompetent candidates were preferred over me in selection process.

Not only me but few others who had given excellent interviews and tests were also declared fail. The reason is obvious that selection had already taken place and tests and interviews were mere formalities.

This is an open violation of merit. I request to Government of Balochistan to take notice of this gross injustice. In addition to that, I plan to knock the doors of courts very soon to ensure prevalence of justice.

Note: Name of Candidate has been withheld on his request.

Published in The Balochistan Point on April 15, 2015

Disclaimer: The Balochistan Point has not confirmed the contents of this article from independent sources and it’s just the account of the candidate.