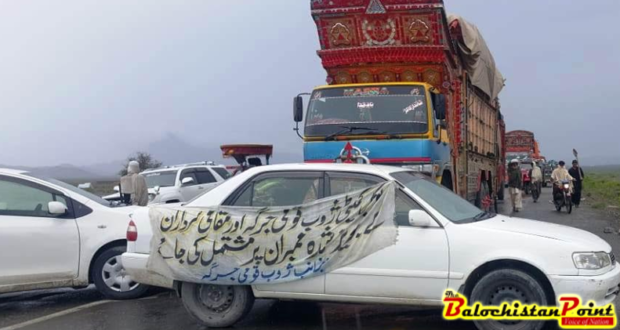 ZHOB: Heavy and light traffic remained suspended on Zhob-Quetta national highway for several hours here on Monday morning, when a large number of people blocked it in protest against the issuance of fake local and domicile certificates to non-residents in the district. The wheel-jam strike call was given by Zhob Qaumi Jirga – comprising Kakar, Mandokhail, Babar and Lawoon tribes. Dozens of vehicles were stranded for hours due to the protest on the highway, causing difficulty to a large number of passengers, including women and children. The protesters blocked highway amid rainfall by erecting hurdles and setting tyres on fire. The angry mob venting their anger raised vociferous slogans against the district government and the concerned authorities. They expressed concern over the increasing trend of issuing fake documents to non-residents.

Talking to journalist Rafiullah Mandokhail, Chairman Zhob Qaumi Jirga Akhter Shah Mandokhail, Sardar Yousaf Abdullahzai Kakar and Mullah Ahmed Khan Mandokhail quoting some estimates, said that thousands of fake local and domicile certificates have been issued to non-residents who are enjoying perks and privileges in the federal capital, while our well-educated segment is running from pillar to post for seeking jobs that caused joblessness and a senesce of deprivation and frustration among the youth.

“Hundreds of influential and well-off people possessing such certificates have jobs on Balochistan’s quota in the federal government since long, but the authorities concerned are silent spectators over the core issue,” they alleged.

They demanded of the authorities to take serious notice and cancel the local and domicile certificates issued after January 14, 2019. They also demanded to dissolve the current local and domicile committee and re-verify the documents issued after 1970. Meanwhile, the district administration officials rushed to the site and held negotiations with protesters and ended the protest after assurance.

It is to me mentioned that local certificate – issued by the deputy commissioner office – is an important document, which certifies that the holder is a permanent resident of the respective district and it is used to avail provincial and federal level jobs, medical and engineering seats on Balochistan’s quota and scholarship opportunities for the students, while a domicile certificate is also issued to permanent residents, but those who have migrated to the district from other areas. The certificate is issued under the country’s Citizenship Act-1951.

Published in The Balochistan Point on April 15, 2019