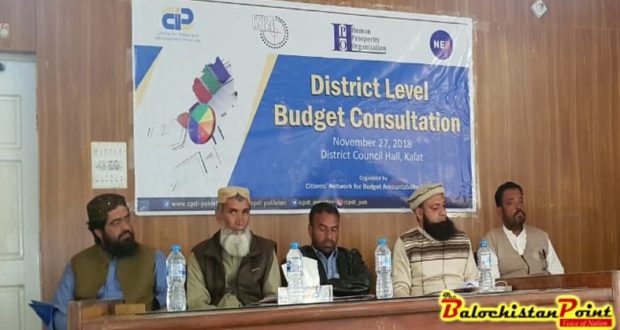 Kalat: Local governments fail to include stakeholders in the budget making process

KALAT:  Study has revealed that the local governments (LGs) had failed to include stakeholders in the budget making process. Only 4 out of 20 districts released pre-budget statement that would have provided the stakeholders a chance to express their opinion on budget proposals. This study was shared with participants in a one-day workshop on ‘Study of Budget Making Process at District Level in Balochistan, here in Kalat on Tuesday.

The ‘Study of Budget Making Process at District Level in Baluchistan ’launched by Centre for Peace and Development Initiatives (CPDI) reveals that Budget Call letters delayed, budget time line is not followed properly, none of the 20 surveyed districts have involved the general public and the stakeholders in budget making. Only 4 districts issued pre-budget statements where the copy was not present for the public, none of the districts has a functional website, 19 out of 20 districts stated that there was no separate budget branch.

Talking about budget transparency, President Human Prosperity organization (HPO) Yousaf Baloch said that districts performance was not enviable at all. Districts are not making use of information technology to share information with citizens; There is not a single district that has a functional website. To aggravate the situation further not a single district issued a citizens’ budget.

While talking to the participants of the event Muhammad Asif, provincial coordinator CPDI said that Pre-budget consultation with stakeholders were held in 80% of districts, mainly involving district officers and elected representatives, ignoring citizens and other important segments of society.

Published in The Balochistan on November 27, 2018