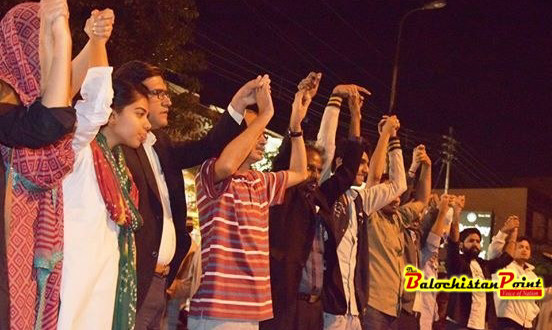 Karachi: Holi festival is originated to celebrate good harvests and fertility. Holi heralds the onset of spring through a riotous celebration of color. The festival affords a moment to overcome any age, race or economic differences in greeting of fellow revelers with gulal, the colored powder, often mixed with water which H-goers characteristically shower upon each other.

To spread the message of inclusivity and express solidarity with fellow Hindu community of Pakistan, the Students of National Students Federation (NSF) firmed a human shield outside Swami Narayan Mandir near Lyari on March 23,during the Holi celebrations students later celebrated Holi with their Hindu compatriots as a symbol of goodwill and peace.

Students expressed in unison that the society has endured enough of hatred and inequality, now is the time to end all differences and step forward towards a society based on respecting multicultural values.

NSF opinion was that the fellow Hindu, Christian and other minor communities, living in Pakistan face extreme injustice. Forced marriages, forced conversions, low employment rate, low citizenship registrations and many other such issues are faced by the fellow communities. They must not be referred to as minority communities because it limits their scope of inclusion and rights.

NSF further expressed that due to their limited outreach these communities are unable to stand up for their rights, under such circumstances people must come forward and raise their voice for the fellow communities.

NSF was present on the special occasion of Holi to promote the message of peace and interfaith harmony. Being compassionate with human beings on the basis of their colour, caste and creed is an extremist approach which needs to be eradicated by initiating and participating in such events. Such events and festivals need to be celebrated in society based on interfaith harmony, fraternity and equality can come into being.

Published in The Balochistan Point on March 23, 2016

2016-03-24
admin
Previous: Editorial: The Plight of Ignored Water Resource Management Graduates and Their Credible Services
Next: Pakistan Television Corporation to Have New Boosters in Balochistan