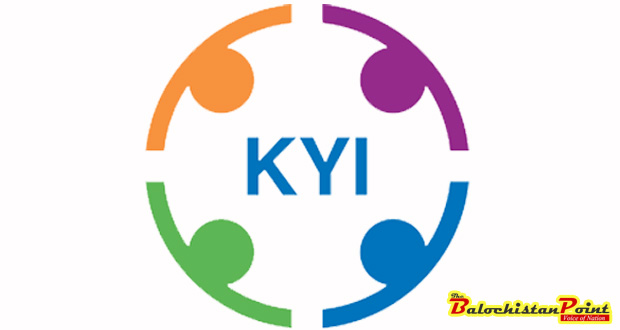 Karachi Youth Initiative (KYI) is a US funded organization. It has been engaged in Lyari, Sultanabad and Korangi areas since 2012 for promotion of Peace and prosperity, Countering violence and facilitating communication between different localities.

Karachi is a city of twenty million people where every area has different mindset. Lack of interaction and communication makes residents of different areas rivals of each others. In order to bridge the gap between different areas KYI pumped billions of rupees on different activities such as workshops, sports events, training and education and film festivals.

KYI is a donor organization, it had set a target to involve 250 Civil Society Organizations but during last two years KYI successfully engaged 280 organizations.

KYI arranged a three day training program in a water park located in outskirts of Karachi. Three hundred youths, including girls and boys, from Lyari, Sultanabad and Korangi were selected for this program. A well placed source told The Balochistan Point that, “Rs.  250,000 were spent on each person and total expenses amounted to Rs. 75,000,000”.

Nosach Film Productions, with the collaboration of KYI, organized three days film festival in Lyari in 2014. 40 different documentaries, short and long films were screened in the film festival. First phase of the film festival was reserved for Balochi films and second phase was for films of English, Urdu and other languages.

‘Stories of Lyari’ was another project which portrayed youth in football, donkey cart race, blinds role, Shedi Dhamal in form of documentaries which were screened in local hotels in Karachi.

NOW Communities was also a grantee of KYI. This organization bridged gaps between Baloch and Katchi communities residing in Lyari. Mahr Dar also received funding for a project which is about running a school about film and photography in Kadha market area of Lyari.

What people say about KYI

Waheed Shad, a social activist said “KYI is doing well in Lyari and they engaged some genius people who have ideas and vision for the youngsters.” He added, “KYI worked positively and successfully.”

Director of Master Imam Bux Educational Theater Siraj said “it is a good platform where our young artists can prove their worth.”

Aslam Baloch, Founder of Sharafi Youth Computer Literacy and Language Institute said, “KYI gave us opportunities to learn and deliver. Now we are working in seventeen villages of Sharafi in Korangi”.

However a numbers of people in Lyari think differently. Member of Mahr Dar’s publication Parveen Naaz said, “KYI failed to reach ordinary youth through its projects.”

Prominent advocate Kifayatullah Qazi said, “KYI monitoring systems were weak and they totally ignored literature. “KYI didn’t know the importance of literature and therefore they didn’t use it during their entire campaign,” lamented Mr. Qazi

Zar Khan Baloch, Chief Editor of monthly Saahig, said “Lyari is the only area of Karachi, where juveniles are involved in gang activities. KYI failed to reach the grass route levels because most of the projects became commercialized.” He further claimed that “KYI pumped billions of rupees in Lyari and other areas but I don’t think they achieved their targets.”

A person working at a high level position in a social organization talked to The Balochistan Point on condition of anonymity.  He said “In the name of peace, Human resource department of Sindh Ranger and District Football Association (DFA) with the collaboration of KYI, organized a football tournament in Peoples Football Stadium in Lyari.”

Point of View of KYI

Media coordinator of KYI, Farhan Iqbal, said “our aims and objectives are peace building between communities who are living in Lyari, Sultan Abad and Korangi. We try to achieve our objectives using sports, education, vocational trainings and by arranging different festivals”. Mr. Iqbal further added, “Monitoring department of KYI is fully active, we had planned for engaging 200 Civil Society Organizations, but we engaged more than our target”.

Farhan Iqbal denied funding Sindh Rangers for the arrangement of a football tournament, and said “this tournament arranged by our Grantee NOW Communities”.

A source told The Balochistan Point that “KYI will conclude in September 2015 and in future I M Karachi can take its place.”

Lyari is disturbed area of Karachi where gamblers, politicians, traders, and criminals are active. Lyari has many positive things to offer in the form of literature, sportsmen and artists but ignorance and vested interests of Political parties keeps Lyari aback.

Presently hundreds of Civil Society Organizations are active in Lyari and they want to restore its glorious past but, according to sources, it’s extremely difficult without a proper vision which most of the organizations lack.

Author is the freelance journalist and researcher. Email: Hdilmurad@Yahoo.com

Published in The Balochistan Point on June 18, 2015