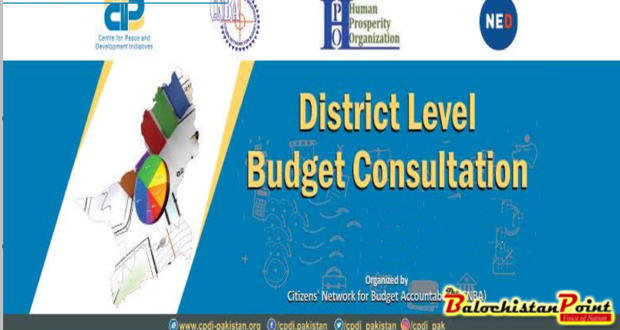 KHUZDAR: ‘Study of Budget Making Process at District Level in Baluchistan ’launched by Centre for Peace and Development Initiatives (CPDI). The study states that budget Call letters were delayed, 19 out of 23 districts stated that they had not received it, budget time line was not followed properly. Out of 23 only 6 surveyed districts conducted pre-budget consultations, 5 districts did not hold a single consultation and 12 district done it without directly involving general public. Only 1 districts issued pre-budget statement but the copy was not available for the public, none of the district has a functional website, 1 out of 23 districts stated that there was no separate budget branch, reveals the

While sharing more details he said that the local governments (LGs) had failed to include stakeholders in the budget making process. Only 1 out of 23 districts released pre-budget statement that would have provided the stakeholders a chance to express their opinion on budget proposals. Pre-budget consultation with stakeholders were held in 78% of districts, mainly involving district officers and elected representatives, ignoring citizens and other important segments of society, 12 districts also involved general public, stakeholders and NGOs indirectly in opinion sharing, only 6 district officials claimed that that have involved general public.

Budget Call Letter (BCL) must be issued in September as first step of budget calendar. The study shows that 83% of the surveyed districts, i.e. 19 out of 23, did not receive the Budget Call Letter (BCL) from the Provincial Government till holding of this survey in June 2019. While out of 23 only 2received it before 15 Nov 2018, remaining 2 district received the BCL between 15 Nov 2018 and 31 March 2019, and after March 31, 2019, respectively. Due to delays at different steps of the budget making only 12 districts were able to get their budget approved from the Divisional Coordination Committee (DCC) before June 30, 2019, Mohammad Asif added.

Talking about budget transparency, Citizens Network for Budget Accountability (CNBA) member organization’s focal person said that districts performance was not enviable at all. Districts are not making use of information technology to share information with citizens; there is not a single district that has a functional website. To aggravate the situation further not a single district issued a citizens’ budget to share salient features of the budget with citizens in easy to understand language. The officials of 22 districts stated that there was no separate budget branch; absence of a separate budget branch could be one of the major causes of delays in budget timelines.

Earlier while welcoming the guests Mohammad Asif CPDI’s Provincial Coordinator in Baluchistan said that Budget is the most important policy document of the government. In the modern-day governance, policies are supposed to be formulated through active public participation. The federal and provincial budgets are hotly debated in both provincial and national assemblies and discussed in electronic/print media, however, the district budgets are approved in quite an isolation. There is dire need to discuss the district budgets among citizen’s groups, civil society and media for indigenizing the local development agenda.

Published in The Balochistan Point on November 2, 2019