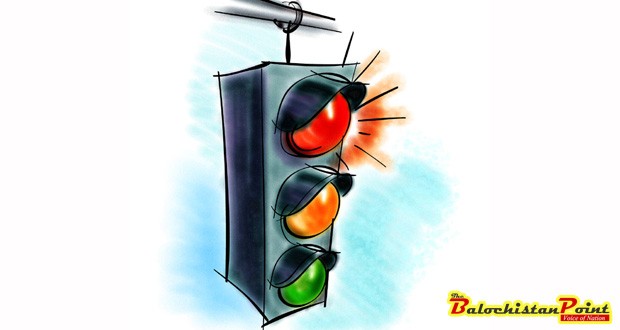 Free flow of Traffic is part and parcel of a civilized society. Traffic lights and adherence to traffic laws is must to ensure free flow of traffic. Unfortunately, Quetta, the only metropolitan city of Balochistan, is deprived of traffic lights.

People from all over Balochistan, travel to Quetta city for their official and private work. This has resulted in increasing the volume of traffic in Quetta. Traffic has become more congested and driving on roads of Quetta is nothing less than a nightmare. Due to lack of traffic lights people drive freely as well as carelessly without caring for any traffic rules. This often causes horrible road accidents and quarrels between drivers and roadside fistfights are a common occurence.

Incumbent government of Balochistan has taken no steps whatsoever for improvement of Traffic system in Quetta. There is lack of a proper traffic engineering mechanism in Quetta which is must for every major city. As a result the traffic related problems are increasing with passage of time in provincial capital of Quetta.

Published in The Balochistan Point on April 8, 2015

Governance 2015-04-08
Editor
Previous: Letter: Let The Students Choose Their Own Career
Next: UN Should Ensure Withdrawal Of Afghan Immigrants From Balochistan: BNP