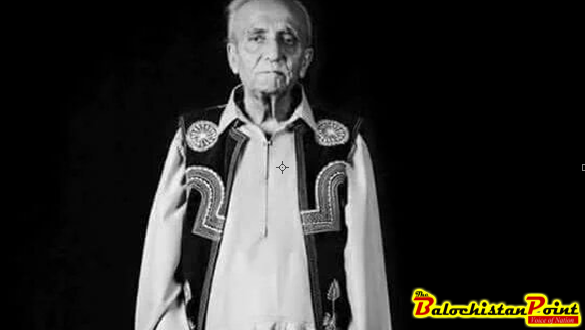 The sun sinks just under the horizon beneath the waves of Arabian Sea, touching the shore of “Padi Zir” (West Bay) of Gwadar. One’s eyes can run as far as possible through the endless ocean at one end and the promontory of Batil at the other.

The moments we capture through our eyes hold hundreds of stories but words hold more than the moments themselves. Once captured through eyes, the colors of moments utter words themselves and one only needs to pen them down.

Today Gwadar moves on with enormous social and economic changes for the world but the legacy of Balochi literature developed within this peninsula remains unheard yet close to the hearts of those who somehow get a glance of the literary waves.

A few decades back, anyone crossing by the beach just before the sunset, could find the Baloch legend, Ustaad Abdul Majeed Gwadari with a pen moving on paper bridging the gap between the experience, expression and utterance.

Born in 1937 in the town of Gwadar, Ustaad’s family basically is native of Bahu Dashtiari, which is today a part of Iranian Balochistan. Gwadar had been an attractive village for settlers coming from different parts of Balochistan and beyond, hence in the late 19th century, Ustaad’s grandparents moved to Gwadar from Dashtiri.

Gwadar was still part of the Sultanate of Oman when Ustaad acquired his basic education during the late 1940s and early 1950s from Saeedia School (an Omani administrated institution) which today is known as the Model High School. Later for a few years, he lived and studied in Karachi where he met the Baloch scholar, Molana Khair Mohammed Nadwi. He remained his student for some time before returning to his hometown.

With his return to Gwadar, he was appointed as a teacher in Model School where he taught for quite a few years. The students under his instruction back then were the second generation of Gwadaris being educated within Gwadar.

Poetry in Baloch society has been the classical literary heritage consisting oral tradition in forms of folk songs passed from one generation to the other. Ustaad renewed the same tradition through his poetry using ancient Balochi words again and introducing techniques of poetry that were long forgotten.

In 1950s, during the great breakthrough in the development of Balochi language, many young and educated Baloch poets tried to revive the creativity in literature and Ustaad was one amongst them.

Much of the inspiration behind Ustaad’s poems came during the changing politics of 1960s and onwards, and with the change came push for radical movements. These changes and the movements were although tough for the people of the time but they did celebrate art in form of literature, previously treated as insignificant for decades.

The poems Ustaad wrote during the regime of Ayub Khan in 1960s, reflected a growing political resistance and civil awareness amongst the masses with particular nationalistic pride present in the society of that specific time-period. In the poem, “Choken Balochani” Ustaad used ethnic consciousness associated with cultural heritage, to stimulate social integrity and nationalism. Even today, “Choken Balochani” remains one of the most heard Balochi poems of all time.

Through poetry, Ustaad questioned the boundaries that had encircled the Baloch, the nationalist movements and focused the political scenarios of Balochistan. Emphasis on equality, the situations of Balochistan in general, of Gwadar in particular and his own personal experience reflect his ideology. For him emphasizing his land and rights for his people in terms of understanding identity and obtaining equality are essential.

By using history and experiences, Ustaad became more credible and was able to promote new hopes and a form of nationalism. According to other well-known writers and poets, Ustaad is known for a unique diction he uses and diversity of words. For his book, “Gulen Bandat”, he had been honored with a literary award by Pakistan literature academy. The collections of his poetry include; Tranj, Shand, Jaz o Talmal. Redage’n Reez, Shadr o Arjal, Las o Almas, Abram, Gulen Bandat and Abadman.

Because of his dual nationality, Ustaad left Gwadar in 1968 and joined Oman army as a civilian teacher. For years, he taught English and Balochi there. He kept visiting Gwadar ever since and is still living in Oman continuing his perseverance toward his language and literature.

Author Bio: Mariyam Suleman is a social activist and a writer from Gwadar. She mostly writes opinion articles, feature stories and blog posts related to the issues of underprivileged. She is authoress of “Bya Noken Rahan Shohaz Kane” or “Come! Let’s Discover a New Way”, a character driven travelogue in Balochi language based on experiences of her year-long stay in the US as an exchange student during 2011-12. Courtesy: Pak Voices

Mariyam Suleman is a freelance journalist and assistant editor of

Published in The Balochistan Point on April 9, 2017