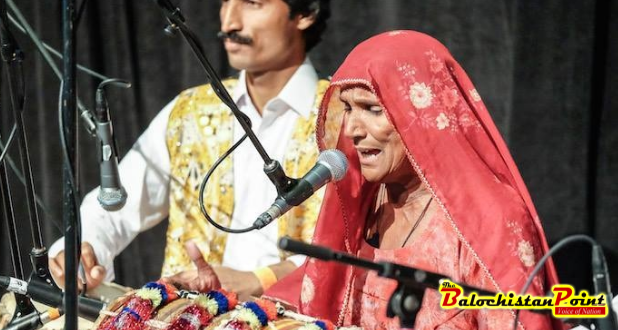 Executive Director Lok Virsa Dr. Fouzia Saeed said on the occasion that today we are covering another milestone naming a hall after the legendary folk singer Mai Bhagi. “This is a tribute to the services of Mai Bhagi that she gave to the folk music of Sindh for 20 long years entertaining millions not only in Pakistan but across the world” Dr. Fouzia Saeed added. She said, this journey will continue and Lok Virsa will keep supporting folk singers.

A large number of participants attended the ceremony and appreciated the efforts of Lok Virsa management. A concert was also held to introduce an emerging young female singer ‘Shamo’ who has been following on the footsteps of Mai Bhagi taking the mantle of folk music forward.

Mai Bhagi was born in the family of singers in Thar, Sindh. One can say Mai Bhagi was destined for a shining future in the musical tradition of Pakistan since the very beginning. Born as ‘Bhag Bhari’, Mai Bhagi was discovered in their thirties when she was performing at a wedding in Karachi and later she went on to perform at national television. She however, also stayed rooted to Thar and promoted her language and folklore through her melodious voice. For 20 long years she kept alive the folk music of Sindh. Mai Bhagi passed away on July 27, 1986 at the age of 66.

Published in The Balochistan Point on March 7, 2017