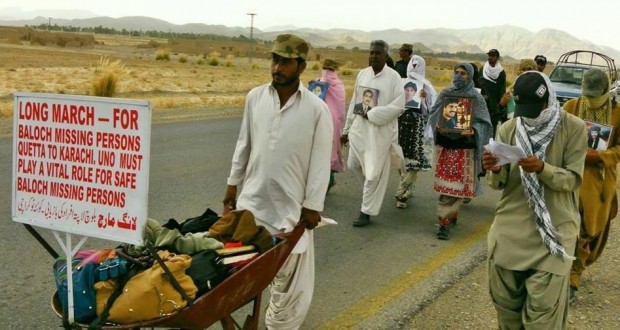 Uthal: Women and children participants of long march reached Uthal Lasbela today with blistered feet and sick health.  The participants have been marching to highlight enforced disappearance and safe recovery of Baloch missing persons from diverse walks of life.   .

The women and children in the long march go on foot 25-30 Kilometers daily.  After arriving Karachi the participants of the long march will have their symbolic hunger strike camp.

The Voice for Baloch Missing Persons (VBMP) has been protesting for the safe recovery of missing Baloch for last three years. The  organization alleges  that some  18000 people have been abducted  by secret agencies of the state collaborated with Frontier Corps F.C  in Balochistan, and more than 1000 of the missing ones have been killed and dumped.

Published in the Balochistan Point on November 14, 2013