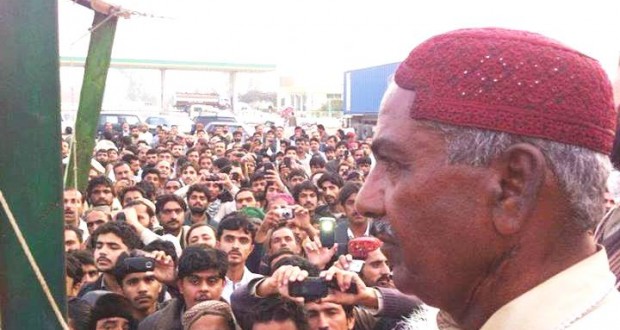 Mama Qadeer is a Trail Blazer

The Pakistani establishment wants that Mama Qadeer’s Voice of Baloch Missing Persons march should pass through Punjab as quietly and uneventfully as possible. That is why while working journalists have been covering the story, the establishment has somehow managed to get editors and anchors to completely ignore this event. They want to continue to keep the people of the largest province in the country in the dark about their policies in Balochistan. They are scared of the truth.

It is a tribute to the Punjabi workers and peasants that the state is terrified of what would happen if the truth got out. It is no tribute to them that it has been so easy to keep them in the dark.

The Voice of Baloch Missing Persons march was the first initiative by the Baloch to reach out and through the Punjab heartland with their grief and sorrow. For that reason it was a total deviation from all the tactics pursued by the Baloch to date. Imagine what would happen if slowly but surely the Punjabi poor labouring class learnt of the ordeals of the Baloch? If they learnt that the people who oppress them are also the cause of the animosity between the peoples that live in our society. It has the potential of turning the tide of history.

For this reason, I think the Voice of Baloch Missing Persons march and Mama Qadeer have made history in more ways than one. The march drew out hundreds of Baloch students who live in Lahore but never participate in politics in Lahore. This interaction, communication, and the building of ties between an oppressed people and an oppressed class is the kind of force that is required to overcome the power of those who have instituted policies that are leading to the greater animosity between the nationalities within our society.

In the long view of history, the Baloch and Punjabis have lived together for centuries. Chakar Azam (the leader of the Baloch) is buried in the heart of Punjab (in Okara). The final destiny of all mankind is to live as global citizens. We can get to that goal a lot sooner if the working people of Punjab learn about the Baloch. And that is the path that Mama Qadeer opened for us. Not that every Baloch should undertake a long march on foot. But that the issue of oppressed nationalities within Pakistan must become one of the central debates in all efforts for the general emancipation of society.( Courtesy: lubpak.com)