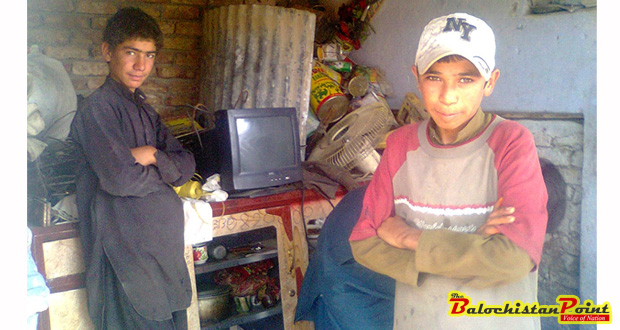 Menace of Child Labor in Quetta

Everyday when sunrises; Jummah Khan and Razzaq leave their homes to collect garbage. Carrying large plastic bags on their tender shoulders, to store garbage, both of them search for saleable garbage items all day. In evening, they sell their daily garbage collection to earn their livelihood.

Jummah is 12 years old and Razzaq is just 11 years old. Domestic circumstances have compelled them to indulge in child labor.

Jummah Khan says he earns Rs. 150-200 a day by selling the collected garbage. “I work to support my family because my father doesn’t do any job,” said Jummah Khan. He has one brother and two sisters and all of them are involved in child labor.

“If we don’t work then our family can’t get anything to eat,” lamented Jummah Khan. “I have been working since I was 4 years old and I don’t think I would stop collecting garbage any time soon,” said Jummah Khan while disappointment clearly expressed on his face.

Razzaq is an orphan; his father had passed anyway few years back. “I work because I don’t have a father,” said Razzaq in an innocent tone. He states that he has been working ever since he remembers anything.

Razzaq refused to tell this reporter how much he earns on daily basis. He feared that this reporter might snatch his earnings from him.

Jummah Khan and Razzaq denied facing any sort of abuse during their job of garbage picking. Whether they were actually not abused or hiding their abuse experiences due to shame, one can’t say with certainty.

However, majority of child laborers are not fortunate and they are often physically and sexually abused.

“Child Laborers don’t have anyone to look after them and that makes them vulnerable to all sort of abuses,” claims Mr. Samad. “I can’t share stories of child labor abuses because I feel disgusted,” revealed the Garbage vendor.

Most of the child laborers are either afghan immigrants or orphan children that have migrated from Khyber Pakhtunkhwa, claimed Mr. Samad

Government of Balochistan is not seen doing anything to curb the practice of child Labor. In fact there is No Anti-Child labor legislation in Balochistan.

After 18th amendment in constitution of Pakistan, provinces are entrusted with the duty of legislating against Child Labor. Balochistan, like the rest of provinces has failed to come up with any legislation that prohibits Child Labor or stipulate any protection for child laborers.

In the absence of robust legislation against child Labor and the apathy of society to child laborers, it’s likely that the menace of child Labor would continue unabated.

Published in The Balochistan Point on May 21, 2015