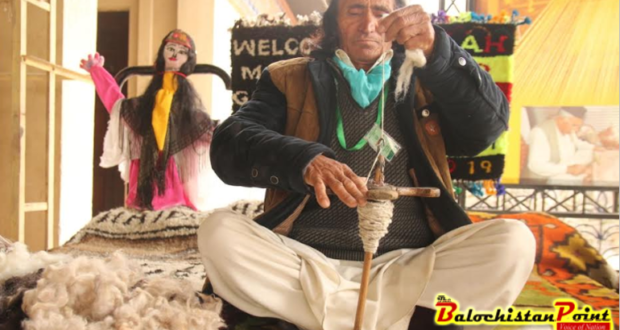 ISLAMABAD: A 3-day National Exhibition on Dying Crafts of Pakistan concluded here at Lok Virsa complex, Shakarparian. The exhibition was organized by the National Institute of Folk and Traditional Heritage (Lok Virsa) in collaboration with provincial culture departments, arts councils and small industries corporations with a sole objective to promote dying craft heritage and to encourage master artisans associated with them to continue practicing these important skills.

The exhibition also aimed to apprise the youth about the richness of the country’s heritage as well as garner domestic and international support for helping finance local artisans.

Prominent among these crafts were Khes, Lungi, Block making and Metal work. “Khes” is a traditional cloth, which is hand-made through weaving, binding and mixing of patterns. The art of making khes first evolved centuries ago when this heavy, durable and intricate cloth was used as blankets; it later became an important export item during the Mughal era. “Lungi” is a six-yard long piece of hand-loomed fabric with a border and a decorated ‘pallu’ or tail piece. Lungi is woven from cotton and come in a variety of designs and colours especially from Khairpur and Badin (Sindh).

“Block making” is laborious work and only few artisans are left, who carve traditional designs on wooden blocks in the areas of Tando Mohammad Khan, Matyari and Hyderabad (Sindh). The wooden blocks are hand carved from trees indigenous to Sindh that is keekar, tali (sheesham) and others.

“Metal work” which was once common in cities and villages is now slowly and gradually vanishing due to its high cost and easy availability of imported metal ware.

The exhibition was inaugurated by Mr. Shafqat Mahmood, Minister for Federal Education and Professional Training on 12th March 2019 in full view of the national media. In his address, he commended the efforts of Lok Virsa in promoting and perpetuating the indigenous craft heritage of Pakistan in such an effective and meaningful manner.