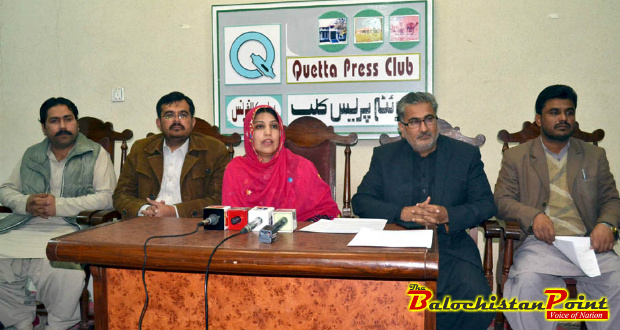 Network Launched for Betterment of Education in Balochistan

ENB is a coalition of different Non-Governmental Organizations (NGOs), Civil Society Organizations (CSOs) and technical experts who will work for betterment of education in Balochistan through advocacy and raising voice.

ENB was represented in the press conference by Zahid Mengal of Azat Foundation, Sumera Mehboob and Hashim Marri from Mechanism for Rational Change (MERC), Hubdar Ali from IDSP and Sami Zarkoon from Civil Society Balochistan.

ENB is based on the rationale that state is responsible for providing educational services to its citizens and all educational policies must be formulated with consultation of civil society.

ENB has been established in the context of deteriorating educational standards in Balochistan where a lot of areas are deprived of basic educational structure in current scientific age.

SumeraMehboob said that basic purpose of establishment of ENB is to provide a platform where different civil society organizations can collectively work for betterment of education.

It was added that goals of existence of ENB include; raise voice for educational problems of Balochistan, ensure efficient utilization of resources with the help of citizens, assist government on formulation of education policy and establish contacts with educational alliances at national and international level.

ZahidMengal said that ENB would work with different stakeholders in Balochistan and provide all possible help and support to education department of Balochistan.

“ENB would work as a watchdog on educational system and it might provide financial assistance in future but not now,” said Sami Zarkoon- Convener of Civil Society Balochistan.

ENB members appreciated the initiative of Education Management Information System (EMIS) and hoped that this initiative would be used for effective monitoring of government schools and providing a platform where parents can register their complaints against schools.

It was also announced in the press conference that ENB would carry out campaigns for raising awareness about importance of education in Balochistan. Network will also monitor enrollment campaigns carried out by different political parties and NGOs in coming session.

ENB would also act as a bridge between civil society and government for solving the educational problems, said members of ENB.

Published in The Balochistan Point on December 31, 2015