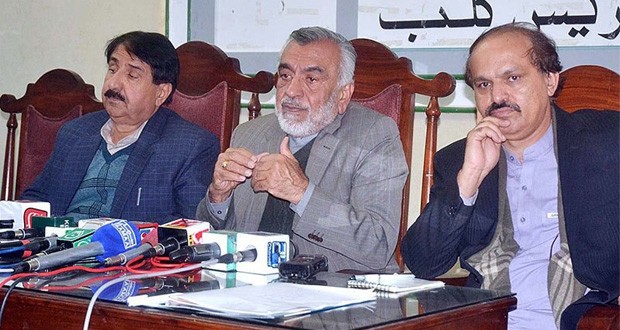 No More Cheating In Exams Will Be Tolerated: Balochistan Government

Quetta – Cheating will not be tolerated in exams in Balochistan anymore, said secretary education on Friday.

Secretary education Abdul Saboor Kakar said this while addressing a press conference along with advisor to Chief Minister on Education, Sardar Raza Barech and Advisor on forests and Livestock Obaidullah Jan Babat.

Speaking at the occasion, Secretary Education Abdul Saboor Kakar announced that government would start “Welcome to School” campaign from 18th February. This campaign would target enrollment of 600,000 children in schools across Balochistan.

In response to a question about the mechanisms of the campaign, Mr. Kakar said “We have requested politicians, civil society members and Local Body councilors to actively take part in this campaign.”

Examination reforms were discussed at length by the speakers at press conference.

Advisor on education, Mr. Raza Barech elaborated that invigilation staff for examination centers will be chosen through computerized draw. He also announced to computerize the marking system of examinations.

“We have setup different teams that would ensure prevention of cheating all over Balochistan,” said Mr. Barech. “Provincial secretaries and other government officials will lead those teams,” he continued.

Since assuming power, Dr. Malik government has focused on improvement of education in the province.

“No one doubts the sincerity of the intentions of government but their plans are over-ambitious and almost impossible to achieve,” an educator told The Balochistan Point.

Published in The Balochistan Point on February 6, 2015

Education 2015-02-07
Editor
Previous: Dominance of Punjab
Next: Another Perspective: Plight Of School Teachers