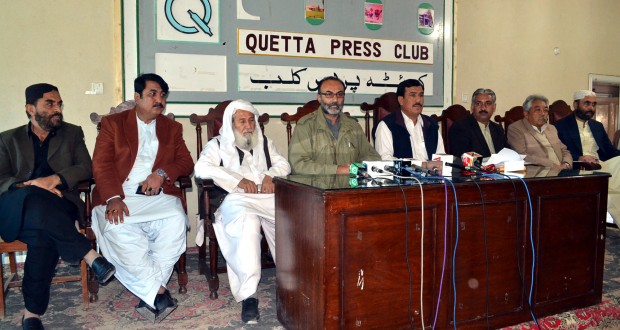 Quetta: Balochistan government is delaying the transfer of power to local bodies in order to appoint their men as mayor of Quetta, said convener of All Parties Democratic Alliance (APDA) Lashkari Raisani.

Yesterday, leaders of APDA held a press conference and lambasted NP and PKAMP for abuse of power and the name of democracy.

NP and PKMAP have allocated funds to the elected councilors belonging from their parties and APDA councils have been denied funds, alleged APDA leaders.

APDA blamed Chief Minister and Godfather of PKMAP, hinting towards Mahmood Khan Achakzai, for colluding to get their men elected as mayor so that they can easily occupy the lands of Metropolitan Corporation of Quetta.

APDA announced to observe black day of 7th December which marks the completion of year of Local Bodies polls.

“NP and PKMAP claim to be champions of democracy but they have badly expose themselves as dictators by delaying transfer of power to local bodies,” said an analyst.

Local Bodies Elections were held in Balochistan on 7th December last year and still transfer of power is not in sight.

2014-12-05
Editor
Previous: Target Killing: Educator Gunned Down In Gwadar
Next: Renewing Threats To Education In Makran