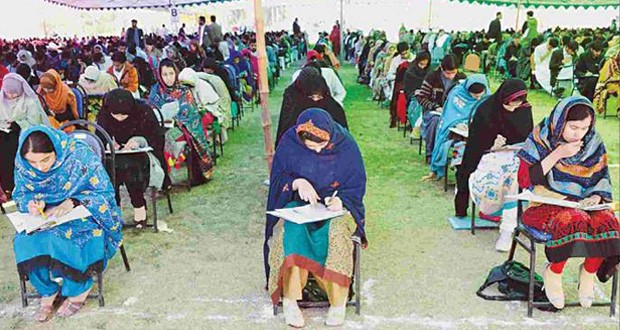 In Quetta alone, more than 9,000 candidates appeared for the test conducted by National Testing Service (NTS).

According to the candidates, arrangements for the test were deplorable. Female candidates specifically faced inconvenience due to poor management of NTS.

“NTS charged excessively high amount of fee for the test [1000 Rs.] and the arrangements were poor,” complained candidates while talking to The Balochistan Point.

“More than 100,000 applications have been submitted for 4,200 vacancies of education department,” Saleem Kurd, Coordinator of NTS Balochistan told Media. He further added that tests would be conducted throughout Balochistan in different phases till 30th June.

“Over 100,000 applications for 4,200 jobs is evidence of the rampant unemployment in Balochistan,” an analyst told The Balochistan Point. “NTS has pocketed over Rs. 100 million from poor candidates of Balochistan,” added the analyst.

NTS has charged Rs. 1000 per application for this test which was condemned as excessively high by different sections of society. Fee for similar test was a mere Rs. 30 in Sindh. Despite several demands and protests by civil society NTS test fee was not reduced.

Published in The Balochistan Point on April 13, 2015