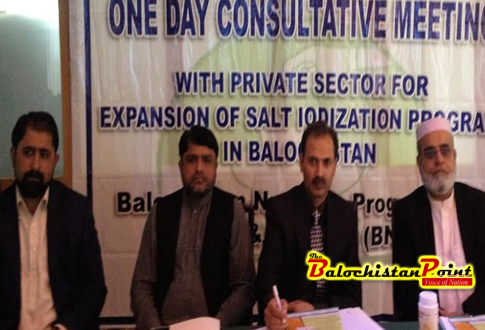 Quetta: Balochistan Nutrition Progamme is striving to address the micronutrient deficiencies among women and children. The national nutrition survey 2011 depicts that 29 % of women suffer from iodine deficiency whereas 35 % of children are iodine deficient in Balochsitan. This was told by Dr. Ali Nasir Bugti, provincial coordinator Balochsitan Nutrition Program here on Saturday.

While addressing a meeting of salt processors of the province Dr. Bugti said that deficiency of iodine equally causes goiter, low IQ, abortions, still births and low energy among women and children.

The only easy and affordable source to improve iodine deficiency among women and children is to mix iodine into salt. Therefore, the iodized salt is the easiest way of consuming iodine in food.

The provincial coordinator nutrition program ensured support to the all salt processors in terms of training, provision of potassium iodide (iodine).

Mr. Shoukat Ali Feyrozai, additional secretary law ensured support for enactment of law to prohibit production and sale of un-iodized salt in the province. He further said that intensive mass awareness campaign may be run to make people aware about the diseases caused by iodine deficiency.

Published in The Balochistan Point on March 18, 2017