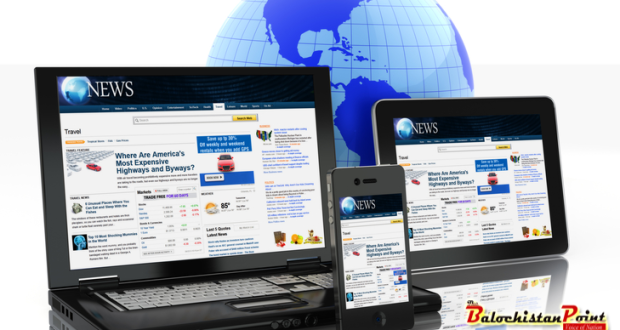 Online Journalism Needs to Be Encouraged in Balochistan

Online journalism is a modern form of journalism, where the information is distributed by means of Internet. It is gradually gaining interest of readers globally. Even in some of the European countries it has affected print journalism. Online journalism in Balochistan, has not yet developed enough, however, it is not entirely absent in the lest deprived and poor province of Pakistan.

Newly another online newspaper Balochistan Voices has been launched by Adnan Amir, a young journalist and   former editor of Balochistan Point .

The online journalism enjoys many advantages because this journalism is searched based and it can be accessed by typing words related to the topic. The readers can access website any time and it is updated round-the-clock.

For the development of online journalism, the journalists and writers in online journalism need to be encouraged in Balochistan. This encouragement will motivate the new male and female writers to become voice of the voiceless people.

Nodbandag Baloch belongs to Turbat, a journalist and freelance writer. While sharing his views with the writer he said that today’s youth are tomorrow’s leaders and guider so we should embolden them and give them the guidelines to write a small stories in the best way.

In modern technology period it is very easy to publish letters. Because today the electronic media does not require any space as it happens with print media.  Letters to the editors of online newspapers can help writers to raise voice against any social issue until it is solved.

Durra Khan is a B.Com student in University of Turbat and a writer; he says that he is amateur of writing.” I want to highlight the issues of the society and I get information and knowledge by reading and writing.” Durra Khan Durra added.

Published in The Balochistan Point on March 7, 2016

2016-03-07
admin
Previous: Letter: Shortage of Water in Quetta
Next: Letter: The Challenges of Good Governance