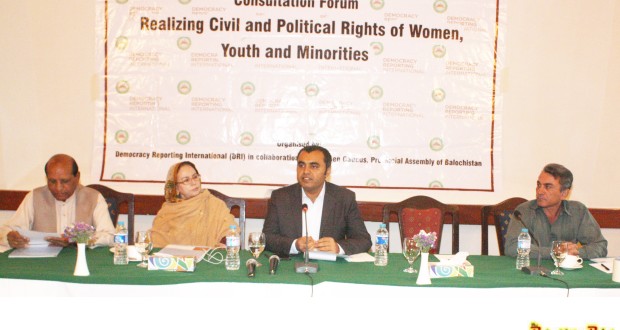 Parliamentarians and Civil Society to Strengthen Rights of Women, Minority and Youth

Quetta: Dr ShamaIshaq, Chairperson Standing Committee for Women, Minority and Youth, announced the formation of a joint working group of parliamentarians and civil society members   on 17th September, to address the issues of civil and political rights of women, minorities and youth.

Dr Shama Ishaq was speaking at the  Consultative Forum “Realizing Civil and Political Rights of Women, Minorities and Youth” organized by Democracy Reporting International (DRI) in collaboration with the Women Parliamentary Caucus of Balochistan Provincial Assembly, in Quetta on 17th September 2015.

Explaining the need for the forum, Dr. Shama Ishaq stressed that it was imperative that civil society and parliamentarians work together to better address issues of women, youth and minorities.

The forum was attended by a large number of participants including members of Provincial Assembly, Women Parliamentary Caucus Balochistan, members of political parties, civil society, officials of Provincial Election Commission and others.

Parliamentarians and civil society members participating in the consultative forum stressed the need to ensure civil and political rights of women, minorities and youth as enshrined in the constitution and as per Pakistan’s international commitments. Pointing many issues of youth, women and minorities, they stressed the need for gender-disaggregated data on women’s political participation and to facilitate the provision of CNICs to women across the province so that they could practice their political and electoral rights.

Speaking on the occasion, DRI’s Team Leader Hassan Nasir Mirbahar explained that the Forum comes as part of DRI’s project “Democratic Stability through Responsive Elected Institutions”,which  aims to increase dialogue between members of the Provincial Assembly and civil society organisations on civil and political rights of women, minorities, and youth.

Women members of the Balochistan Assembly present at the forum made a collective call for inclusion of women in the provincial cabinet and also urged the Assembly to consider nominating a woman member as Speak of the Assembly. MPA Yasmeen Lehri pointed out that women parliamentarians have all the skills and experience required to perform their functions at par with parliamentary standards but they are undermined by male counter-parts.