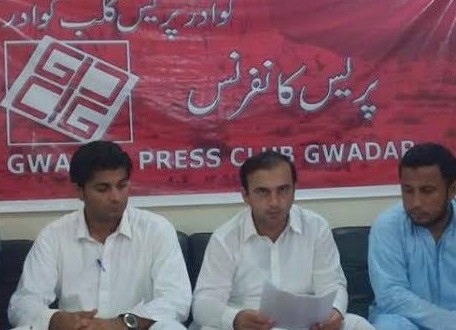 Gwadar: Illegal use of power and dominancy over the employment opportunities by the high ranked administrators and bureaucrats through out Balochistan has deprived the educated and skilled youth. The Gwadar Youth Forum raised voice against a similar unfair move through their press conference held on Wednesday at Gwadar press club.

Addressing to the journalists, the organizer of the forum, Barkart Ullah Baloch stated that through the authority of the Harbor, a number of local candidates were called for tests and interviews on 1st October for the project “Rehabilitation of Pasni Fish Harbour Authority”. However, as the candidates reached to the office of the authority, they were severely disappointed.

“The tests and interviews were cancelled. According to the candidates, the director of Pasni Fish Harbour Authority himself admitted that new employees from other districts have already been appointed through dominant approaches. It had only been a week that Gwadar had to tackle with the Small Industries Wing issue that had already gambled millions of rupees from Balochistan and the GDA Hospital that had got an employee on the basis of political approach. Now the injustice with the skilled youth of district Gwadar in Pasni Fish Harbour Authority has increased the resentment of the local Gwadaris.” said the organizer of Gwadar Youth Forum.

The forum also clarified that along with announcing the test and interview for the vacancies of the authority only in an unpopular newspaper, the authority gave a period of only one week to collect the documents and even denied to collect documents from the locals in the beginning. These things already confirmed the duplicity of the authoritarians.

Through the press conference, the forum severely opposed the recent unfair appointments of employees. They demanded the Chief Minister and Governor of Balochistan to terminate all the employees recruited by illegal approaches and to ensure merit basis and locality for the newer recruitments with in the time period of three days or else the government will have to be responsible for the serious demonstration and protest in Pasni and through out district Gwadar.

Published in The Balochistan Point on October 2, 2014

2014-10-02
admin
Previous: 2 persons killed in a hand grenade attack in Quetta
Next: Innocent and peaceful people are harassed in name of search operations: BNP