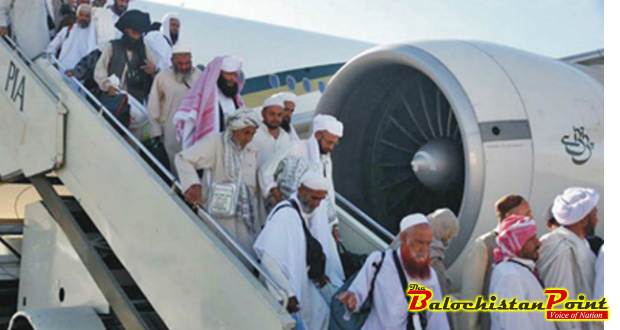 Meanwhile media is focused on the death toll of Mina stampede, Pilgrims of Pakistan have complained about pathetic arrangements.

A group of pilgrim from Quetta, who are in Makkah at the moment, revealed the poor arrangements to Balochistan Point while talking on condition of anonymity.

Pilgrims complained that Hajj mission of Pakistan had made poor selection of buildings for the pilgrims. “Rooms for Pakistani pilgrims were over-occupied and very inconvenient to live in,” lamented a pilgrim.

Rooms for Pakistani pilgrims were over-occupied and very inconvenient to live – Pilgrims.

Similarly, food and transportation arrangements were abysmal for pilgrims of Pakistan as per the claims of the pilgrims.

There was no shade and cold drinking water for the pilgrims in scorching heat of over 50 degree Celsius, alleged another pilgrim.

“We didn’t see any person from government of Pakistan for help of Pakistani pilgrims,” claimed the pilgrims from Quetta.

“Transport fare was raised by almost 100 times, we had to pay 500 Saudi Riyals for a journey that normally costs, just 5 Saudi Riyals,” lamented another pilgrim.

Saudi government allowed the looting of pilgrims without any check and balance which is condemnable, said the disgruntled pilgrims.

Reportedly, Pilgrims from Afghanistan, Iran and India were living in much better conditions as compared to Pakistani pilgrims.

Pilgrims from Afghanistan, Iran and India were living in much better conditions as compared to Pakistani pilgrims.

Pilgrim from Quetta claim that it’s because government of aforementioned countries ensure that there is no corruption in their Hajj Missions, unlike Pakistan.

Officials of Pakistani Hajj mission were not available for comment when approached by Balochistan Point.

Published in The Balochistan Point on September 29, 2015