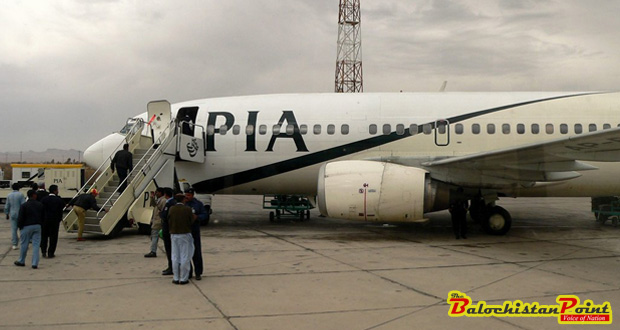 Plight Of Air Passengers In Balochistan

The word Balochistan is synonymous with deprivation in Pakistan. There isn’t a single federal department that is not depriving Balochistan of its legitimate rights. Now, Civil Aviation Authority and Pakistan International Airlines (PIA) have also joined the ranks of the organizations that are directly responsible for deprivation in Balochistan.

In a move that has gone unnoticed, PIA has replaced all its planes on Balochistan routes with ATR-72 aircrafts. Previously larger planes such as Boeing-737 and Airbus A-310 were operated from Balochistan.

Aviation needs in Balochistan have increased during the last few years due to deterioration of law and order on highways. Plenty of people want to travel to Lahore, Karachi or Islamabad on a daily basis but ATR-72 can only accommodate 72 passengers. Therefore, the use of ATR-72 has caused a great deal of inconvenience for people of Balochistan who have been deprived of using aviation services in the time of need.

Moreover, with the temperature higher than 35 C, the luggage of person would be send to the destination by road as ATR-72 can’t carry it. To what extent the passengers will suffer when they get their luggage 12 hours after reaching their destination by air, is simply unfathomable. Thanks to PIA, people of Balochistan will suffer that regularly in the coming summer season.

That’s not all; the biggest drawback of ATR-72 plane is that it can’t carry stretcher patients to Karachi or other cities. Balochistan lacks state of the art hospitals and often seriously ill patients are flown to Kachi to save their lives. In the past, PIA planes such as Boeing-737 and Airbus A-310 were used for that purpose. Now, these planes have been replaced with ATR-72 and this has deprived the people of the opportunity to fly patients for urgent treatment. Now, people have no choice but to transport patients to Karachi by road and that would significantly decrease the probability of patients getting life saving treatment on time. Effectively, PIA is depriving the patients of Balochistan from the right to live.

Likewise, PIA discriminates with passengers of Balochistan in fares. In economy class fares, PIA uses Lower Reservation Booking Designator (RBDs). These are the cheapest tickets within the economy class of PIA. For example if the fare for economy class is Rs 8,000 then the fare for Lower RBDs in same flight would be Rs 6,000 or less. Guess which province is derived from this facility? It’s only Balochistan where the PIA doesn’t provide this facility, despite the fact that it’s the most backward province in the country.

PIA is the national flag carrier and government owned airline. It’s the national duty of the airline to provide the necessary services to people of Balochistan even when it’s in loss. Having said that, PIA was making huge operating profit from Balochistan before it reduced its number of flights and size of planes.

Civil Aviation Authority (CAA) is the organization that regulates the airline industry in Pakistan. It’s the duty of this organization that all provinces of the country receive fair and adequate aviation services and CAA has badly failed in performing that role. Shutting down international flights despite increase in demand and replacing larger planes with ATR-72 in Balochistan speak volumes about the failure and apathy of CAA for aviation issues in the restive province. It would not be unfair to say that CAA along with PIA would be directly responsible for any patients that die in Balochistan due to delay in reaching Karachi.

Treatment meted out to people of Balochistan by PIA and CAA has almost gone unnoticed. The motivation behind this treatment is the idea that one can get away with depriving Balochistan from its rights. CAA and PIA are following the lead of WAPDA, Sui Southern Gas Company, National Highways Authority and other federally controlled organizations. Dr. Malik Baloch, the infamous Chief Minister of Balochistan is mum about this issue because he has his own airplane that he and his cronies can use at will.

The following steps should be taken to provide relief to air passengers in Balochistan:

3) Flawed decision of replacing Boeing-737 and Airbus A-310 with ATR-72 should be reversed immediately.

4) Lower RBD fare should be introduced in Balochistan.

5) Anti-Balochistan decisions made by the PIA management should be investigated by CAA and Aviation division of Pakistan.

Last but not the least;

6) The provincial government should vehemently protest to the federal government for ignoring Balochistan in every walks of life including aviation.

Republished in The Balochistan Point on May 18, 2015

Governance PIA Provincial Autonomy 2015-05-18
Editor
Previous: Not A Single Federal Secretary From Balochistan
Next: Letter: Reality Of Education In Balochistan