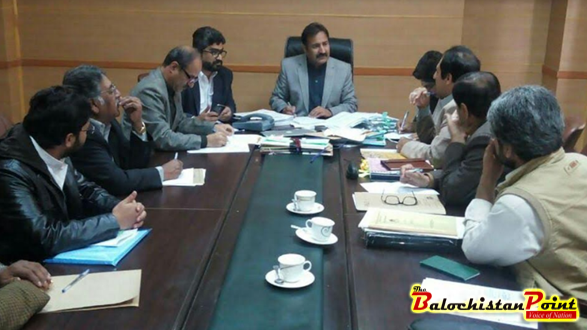 The main objective of the meeting was to look over all the progress in the civil work completion, equipment’s material purchase and  in the said colleges.

On the occasion Additional Secretary Health Abdul Rauf Baloch said it is a milestone achievement and all it happened due to pragmatic team work and supportive role of Chief Secretary Balochistan Saif Ullah Chatta.

He said that negotiations were underway for making a prospectus of New Medical Colleges with PMDC and admission policy will be announced soon after the PMDC inspection team visit in the said medical colleges.

In addition, he said that establishment of New medical colleges would pave the way for provision of better health care in the far-flung areas across the province.

Rauf Baloch vowed, ” All possible steps are being taken to start academic activities at new medical colleges in the current academic year.”

He said essential measures were being taken to purchase medical equipment’s and recruitment of faculty members along with supporting staff was underway. Meanwhile he instructed the project directors/principals to complete the progress work as soon as possible.

Published In The Balochistan Point on January 13, 2017

2017-01-13
admin
Previous: Letter: Save the lives  at Gadani
Next: People are compelled to drink contaminated water in Saindak