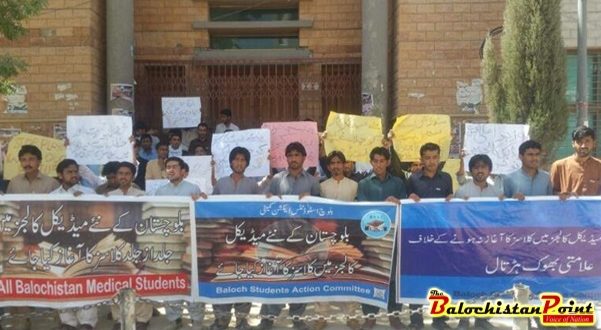 Protest will continue until new medical colleges are functional. BSAC

Students chanted slogan against the tacit role of government.  Leader of BSAC during protest briefed media that the Govt is not interested in opening of new Medical Colleges.

They said, :”Govt has been making shallow promise for last four years but nothing is done on ground to functional these colleges namely Makran, Kuzhdar and Loralia medical colleges.”

During protest leaders of BSAC said before hunger strike camp they  had highlighted the issues through press release and press conferences, however,  govt unwillingness has forced  us to set up hunger strike.

Leaders requested everyone to participate and pay their role for this noble cause.

They said: “Today it is 5th day our protest  but Govt officials are paying no heed. Protest will continue till the opening of new Medical Colleges.”

Published in The Balochistan Point on April 15, 2017

2017-04-16
admin
Previous: Mashal’s lynching; where this society is off to?
Next: Strategic importance of Balochistan