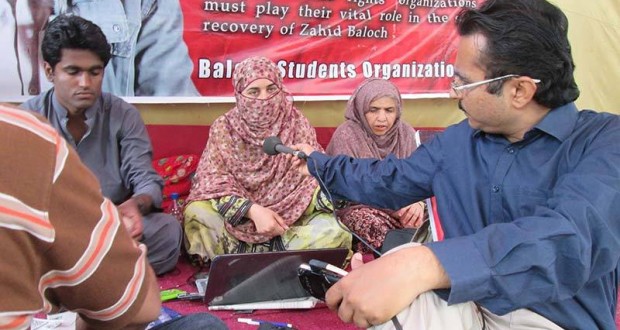 When peaceful protestors of the missing persons issue tried to

approach the Parliament building in Islamabad yesterday, the police responded with a baton-charge; firing and tear gassing the demonstrators. Many of these demonstrators were consequently wounded, along with six policemen. Additionally, the police attempted to confiscate the recording equipment of media houses trying to cover the incident.
Even though the PM has taken note of the incident and ordered that detained protestors be released, who should we believe was responsible for allowing the charge to go through? On whose orders was human rights activist Amna Masood Janjua arrested by the police? In functioning democracies, Parliament and other legislative buildings are venues for protestors the world over. Is this attack not symbolic of how little heard the Baloch voice is? Democracy guarantees the right to public protest, and the treatment of the missing persons as well as their relatives by a so called democratic Pakistani state, is appalling. Ironically, the issue of missing persons started during the military rule of Musharraf. Yet the democratic governments resorted to the same illiberal and undemocratic treatment of the Baloch. Not a single politician from any political party acknowledged the VBMP. However, the government did table the draconian PPO which will legalize these abductions.

There have been two kinds of reactions to the issue of the missing persons. Either the aggrieved respond with violence or else strive for justice non-violently. We seem to see enough of the latter, but the peaceful march of the Voice for the Baloch Missing Persons (VBMP) lasted almost six months. The 72 year old Mama Qadeer walked 2000 km. Yet there was not much coverage in the media, especially the mainstream, Urdu channels and print. Presently, Johar Latif, a young man from the Baloch Student Organization is protesting the abduction of the organization’s Chairman, Zahid Baloch , and is slowly dying of his hunger strike. Why does no one cover this peaceful and dignified protest? There is no free media left to report from Balochistan. What occurred in Islamabad yesterday was a betrayal of democracy. When will we begin to separate our heroes from our villains, and stop demonizing the peaceful? Every conflict has its set of problematic parties, but there must at least be the recognition that alongside the violent dissenters, there exist scores of bereaved, peaceful protestors exercising their democratic, human right to demand answers, to demand safety for their families, and justice.( Courtesy:  The Nation)

Published in the Balochistan Point on April 29, 2014

2014-04-29
admin
Previous: An Icon of Free Media
Next: Mastung: Six policemen killed in a shootout during a bank robbery