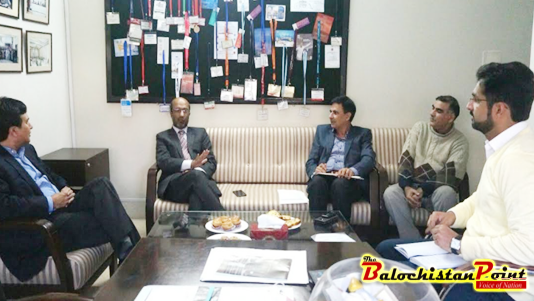 Provision of safe blood to the masses is utmost priority: Noor-ul-Haq Baloch

On the occasion Secretary Health Mr. Noor Ul Haq Baloch appreciated the German Government progressive efforts and SBTP Islamabad for the construction of a state-of-the-art Regional Blood Centre in Quetta and taking a keen interest in uplifting the transfusion services of the province.

He reiterated the commitment of the Balochistan government to ensure the safe supply of blood to all in emergency basis and most probably to the Thalassemia patients in the province.

Prof. Zaheer briefed the Secretary on the Phase-I of the SBT project in Balochistan and the issues related to the proper operationalization of the Regional Blood Centre. While answering to a question by the Secretary about the possibility of a public private partnership to operationalize the Regional Blood Centre, he agreed to provide the required assistance to develop the TORs for the outsourcing similar to the model adopted by other provinces.

The Secretary discussed the idea of centralized processing for all blood units collected at public and NGO sector blood banks of Quetta. The participants appreciated the idea as this would ensure availability of safe blood in the city.

Regarding Phase II of the SBTP for the province, the Secretary welcomed the idea of involving NGO blood banks in this phase and appreciated the plan for up-gradation of two hospital blood banks in Loralai and Turbat. The sites have been identified for both blood banks and will be notified soon. The Secretary asked the SBTP team to share promotional material including the pamphlets, videos, brochures which could be used to advertise the Regional Blood Centre. Mr. Zahid Mahmood informed the Secretary about the planned inauguration of the Centre in early March and requested him to invite the top leadership of the province. The German Ambassador to Pakistan will grace the occasion also.

The SBTP team lauded the efforts of the Balochistan Health Department under the dynamic leadership of the honorable Secretary Mr. Noor Ul Haq Baloch to expedite the implementation of blood safety project in the restive province in provision of safe blood to the poor masses of far flung areas.