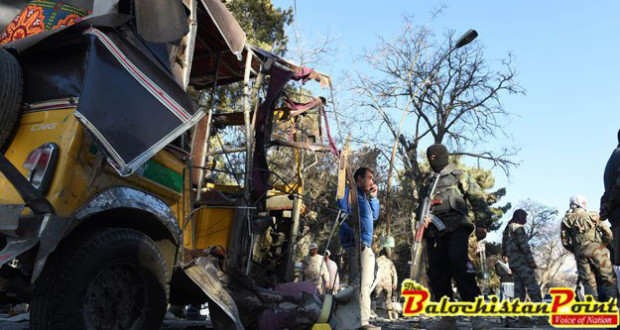 Quetta: At least 10 people were killed and 25others sustained injuries when a suicide bomber targeted a security forces’ vehicle near the premises of the heavily guarded Quetta district courts on Saturday.

Four of the dead were paramilitary soldiers while seven were civilians, officials said citing initial reports.

According to the details, the security convoy comprising a truck and two vehicles was on routine patrolling on the Adalat Road of Quetta city when a bicycle rider targeted it.

The banned Tehreek-e-Taliban Pakistan (TTP)   claimed responsibility for the attack.

A large number of policemen rushed to the spot shortly after the incident and cordoned off the area. The deceased and injured were shifted to the Civil Hospital Quetta.

“The TTP’s TSG unity carried out the attack that targeted the convoy of security forces,” Taliban spokesperson, Mohammad Khorasani said in a statement.

DIG Imtiaz Shah confirmed it was a suicide attack and that the attacker blew himself up near a vehicle belonging to the FC. “Around 12 to 15 kg of explosive material was used in the blast,” he said.

Inspector General Froniter Corps General Sher Afgan while talking to media confirmed that it was a suicide attack. “Such attacks cannot dampen our spirit as we will continue fighting these elements till the establishment of peace in Balochistan,” he said.

Balochistan government spokesperson Anwar ul Haq Kakar said,  “The act of the suicide bombing is reaction of the security forces’ operation and aims at demoralising the security forces,” he said, adding that forces’ morale is high and government will not tolerate any kind of terrorist act.

The blast damaged around five vehicles, four motorcycles and three rickshaws. The window panels of the nearby buildings were also shattered in the blast. The explosion was heard in a wide area.

An emergency was declared in all nearby hospitals. Dr Rasheed Jamali, the on-duty physician at Civil Hospital Quetta, said that eight people among the injured were in serious condition and were moved to the Combined Military Hospital (CMH) for medical treatment.

Claiming that the attack was aimed at damaging the CPEC project, the secretary said, “Because of the economic corridor, the security forces are being targeted by terrorists.” He said the terrorists don’t want CPEC project to complete.

Published in The Balochistan Point February 7, 2016