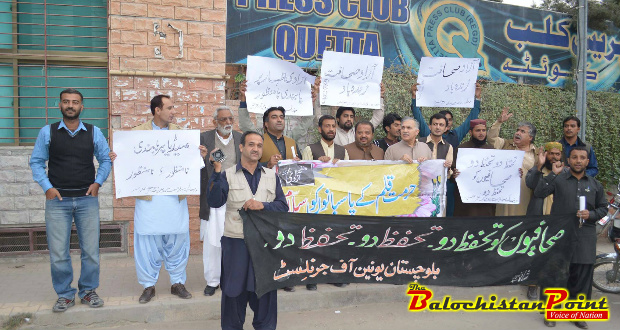 A protest demonstration was held by Balochistan Union of Journalists to mark U.N designated “International Day to End Impunity for Crimes against Journalists.”

Protestors were holding placards and chanted slogans for protection of journalists in Balochistan.

Addressing the participants of the protest, Shahzada Zulfiqar, President Quetta Press Club, lamented the apathy of Balochistan government towards crimes against journalists.

“42 journalists have been killed in Balochistan in last few years,” said Mr. Zulfiqar.

Mr. Zulfiqar said that families of slain journalists have not been paid compensation by Balochistan government.

“We demand that government should pay same amount of compensation for slain journalists as the pay for slain personnel of security forces.”

2nd November has been selected as “International Day to End Impunity for Crimes against Journalists” by UN through its adopted Resolution A/RES/68/163 in 2013.

Published in The Balochistan Point on November 2, 2015