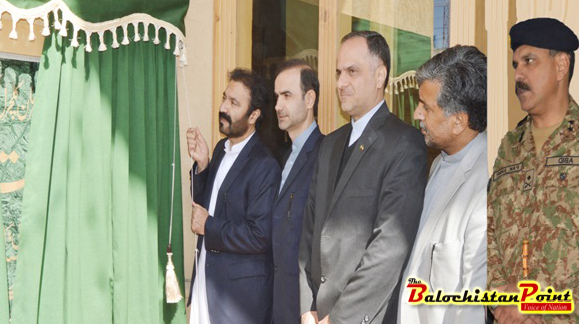 Quetta:  Cultural Minister Mujeeb-ur-Rehman Muhammad Hasani has said that our priorities include the promotion of the Balochistan’s culture and literature. Culture is our identity and we will extend support to the artists. He said this while addressing the participants of the inauguration ceremony Noori Naseer Khan Cultural Complex auditorium on Tuesday.

Addressing the ceremony, Minister of Culture thanked for the personal efforts of Chief Minister Nawab Sanaullah Zuhri that he launched the large auditorium of Balochistan. He said that huge revenue was expected from Noori Naseer Khan Cultural Complex auditorium.

He said “The auditorium is equipped with contemporary requirements of the current time which accommodates five hundred people and will be a source of encouragement for the development of   Baloch culture and local artists.”

“Modern digital theater constitutes a welcome step in the cultural complex where the public will be able to enjoy cultural programs.”Provincial Minister added.

Mujee-ur-Rehman said that   artists’ endowment fund had been increased from 5 million to 50 million.

In the end of event the selected artists and writers from Balochistan were awarded the  ‘Faiz Muhammad Cultural Award’.

Published in The Balochistan Point on January 31, 2017