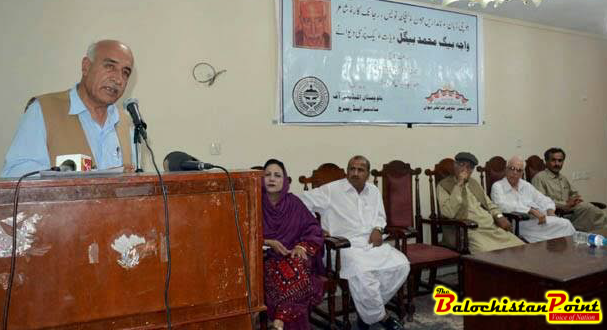 QUETTA: A condolence reference was organized by  Balochi Labzanki Dewaan Quetta in collaboration with  Balochistan Academy of Sciences and Research to pay glowing tribute to late Muhammad Baig Behgul a renowned Baloch literary figure at Quetta Press Club on Wednesday.

Speakers expressed that People devoted their lives for the promotion and development of language; literature and culture are like assets they should be given credit and admiration in their life instead of after their death.

Paying tribute to the contributions of Baig Muhammad Behgul for the promotion of Balochi literature, former Chief Minister Balochistan, Dr. Abdul Malik Baloch said Baig Muhammad Behgul was great literary figure who had a wide array of pure Balochi words and vocabularies which would made more attractive and charming  his pieces of writing. “I would read his articles when I was a student, his words used to inspire me a lot.”

Dr. Malik said that Mr. Baig grow up in Liyari but he had a strong grip on Balochi language as very few people have such quality to have good control on languages , adding that he was not only a writer and poet rather he was a great intellectual and researcher. “His thoughts in his articles depicted as if he was educated from Oxford.

Yar Muhammad Badini, Chairman Balochi Labzanki Dewaan and researcher said that everybody has to play his role for the promotion of literature and languages particularly our representatives in the parliament as our artists, poets and writers mostly confronting with immense poverty and living a hard life, and it is very sad when we come to know about them when they die after passing through a long sickness and poverty. “We have to extend respect and financial support to our artists and poets since they are playing a crucial role for the promotion of languages despite poverty and hardships,” he said.

Writer and intellectual, Dr. Niamatullah Gicki said that Baig Muhammad Behgul despite immense poverty played a vital role for the promotion of Balochi literature, adding that his literature widely help politics in Balochistan.

Published in The Balochistan Point on May 18, 2017