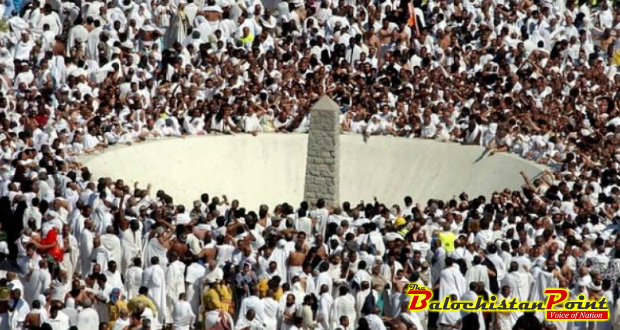 Hajj this time proved to be bloody affair as over 1,000 pilgrims died in two separate incidents. First a gigantic crane crashed in Makkah resulting in the loss of lives of 107 pilgrims. Then a stampede at Mina, during the Jamarat ritual, took the lives of over 800 people including 52 Pakistanis, according to modest estimates. These two tragedies during Hajj are hotly debated, but what’s missing is the narrative holding the regime in Saudi Arabia responsible for both the incidents.

Mina tragedy reignited the Saudi-Iranian cold war in the public. State sponsored media in Iran quoted anonymous Saudi officials to claim that stampede at Mina was caused due to VIP movement of Prince Mohammed bin Salman, the deputy crown prince of Saudi Arabia. State backed media in Saudi Arabia retaliated by quoting anonymous Iranian officials to claim that a group of Iranian pilgrims caused the Mina stampede. Supporters of both countries in Pakistan started propagating the narrative of their masters on social media forums rather than approaching this issue logically.

As usual, the religion card was tactfully played by House of Saud to absolve itself of any responsibility in both Makkah and Mina tragedies. Saudi Grand Mufti termed both incidents as part of fate and destiny, which according to him are inevitable and can’t be forestalled by humans. Similarly the clerics in Pakistan, who have a soft corner for Saudi Arabia for reasons not hidden to anyone, came out openly in defense of the Saudis. They congratulated the families of victims, as their loved ones had achieved the distinction of martyrdom in holy land during Hajj period. It’s needless to say that there is an overwhelming majority of people who are ready to be deceived in the name of religion.

As the death toll of Pakistani pilgrims increased, certain Pakistani channels started criticizing Saudi Arabia over negligence in Mina tragedy. It was a step in the right direction and news channels were asking all the right questions, but then came the PEMRA. According to reports, PEMRA contacted the owners of all major news channels and strongly warned them against any criticism of Saudi Arabia. The flawed reason used by PEMRA is that criticism on Saudi Arabia would damage the relations of Pakistan with a brotherly Muslim country. This episode once again exposed the reality of the so-called freedom of expression in Pakistan.

Saudi Arabia is responsible for all the management of Hajj related activities and therefore it is also responsible for any mishap. The responsibility for both Makkah and Mina tragedies fall squarely on the shoulders of the Saudi government and that can’t be hidden by playing religion card or using proxies in countries like Pakistan.

At the moment there is uncertainty over the cause of the Mina stampede. As per the accounts of surviving pilgrims, quoted by International media, the stampede occurred because multiple routes were closed at the time. One can assume that routes were closed due to VIP moment of a Saudi Prince but nothing can be said with certainty until and unless transparent investigations are conducted.

Moreover, the negligence of Saudi Arabia in dealing with Mina stampede should be a potential triggering point to challenge the hegemony of Saudi Arabia over holy sites of Islam. The holy sites of Makkah and Medina belong to entire Muslim Ummah, assuming the notion of Ummah to be true. Hence, all the Muslim counties in the world should have joint control of all the matters related to Hajj without affecting the territorial integrity of Saudi Arabia. However, realistically speaking that’s almost impossible. When Muslim countries, minus Iran and Syria, can’t even criticize Saudi Arabia then how can they challenge its hegemony on historical Islamic sites?

Democracy in Pakistan, which is still in stages of infancy, is damaged by nothing more than creating new holy cows. Pakistan already has many holy cows internally that are beyond any criticism and addition of any external holy cow will not bode well for democracy in Pakistan. Therefore, the need of the hour is that Pakistan as a country should be able to criticize the government of Saudi Arabia which is responsible for Makkah and Mina tragedies.

Published in The Balochistan Point on October 7, 2015